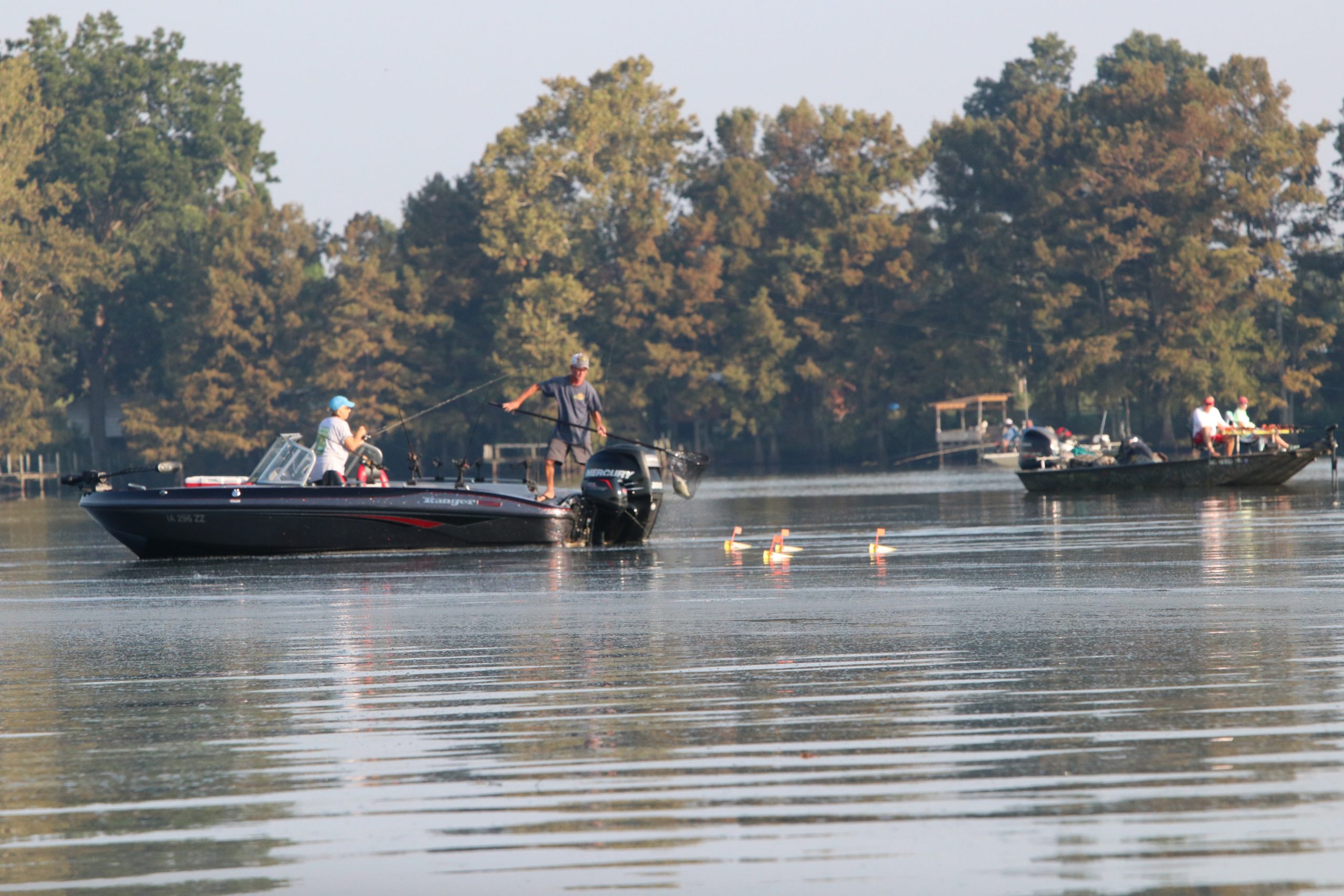 Repeat of the Spawn. Tennessee River fishing guide Richard Simms says, “Look for a pattern similar to spring but they won’t be aggressive or as shallow as in the spring. Fish will travel routes from deep summer homes up toward shallow water areas. When fish are moving, it’s important to find the right travel route at the right depth. Electronics help to find ledges, cover and contours where crappie can be found. Mapping is a very important tool for finding the right spots.” 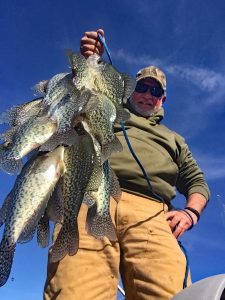 Downsize Baits. Les Smith, avid Mississippi recreational and tournament fisherman, says “I power troll with three-ounce weights and ¼-ounce heads with big plastic bodies all summer. However, in the fall it’s important to downsize. In September I’ll switch to 1.5-ounce weights, use 1/32- or 1/16-ounce jigs and slow down to 0.7- to 1.1 mph. In October the fish here want live bait, so I’ll start tipping the jigs with minnows.”

Golden Rule- the Fall Shad Connection. Experts agree that shad play an important role in the fall. Brad Chappell, Mississippi guide and Crappie Connection podcast host, says fall is the time when fish are fattening up for winter. They gorge themselves during the day on shad. The feeding begins as soon as the water starts to cool in September and gets better every week until it peaks in November.”

Three-time Classic Champ winner, Charles Bunting, says, “In the big open waters in Mississippi, the shad are very important. Crappie will follow the baitfish so to be successful, it’s important for a fisherman to find and follow the shad, too.”

Overcast Days. Bunting continues, “The shad will go up and down in the water column any time of day, but on cloudy, overcast days they are most likely to be shallow, maybe up as shallow as two or three feet from the surface, whether in five- or 20 feet deep water.”

Power Up – Troll Fast. Chappell says, “A weekend fisherman can longline jigs and have a great time. I pull Bobby Garland Stroll’R jigs at 0.8- to 1.4 mph to cover a lot of water and look for bites. After catching a few fish in an area, repeated runs can be made along the same path.”

Percy Priest. “Fall fishing is awesome here and the key is following the shad up into the creeks. Until the water temperature drops below 65 degrees, I like to pull Bandit 200-series crankbaits at five to eight feet in about 15 feet of water.” – Jim Duckworth, Tennessee guide

Tennessee River. “Fish start moving from deep summer areas around the mouths of creeks back toward shallower areas. Start by looking 200 to 500 yards up from the creek mouths in the creek channels. Look for stumps and brush and you should find the crappie. The fall bite isn’t as good as the spring, but there are plenty of fish on the river for fun action and a good trip.” – Simms

Kentucky Lake. “Look in the bays by starting in eight feet of water and working deeper until you find the fish. The lake has had a few tough years, probably due to the carp, but the crappie fishing is getting better now and there are many small crappie so the future looks good.” – Jeff Riddle, Tennessee guide

Reelfoot Lake. “Like Kentucky Lake, Reelfoot has had some down years but it’s coming back strong. My best tip is to fish it mid-September through mid-November. Go to the deep end of the lake, stay in nine feet or deeper water and use minnows. It’s simple fishing and can be good.” – Riddle

Ross Barnett. “Barnett has had a tough crappie year so far so I’m not sure about the fall. The best bet is to fish along the channel and get baits down in the timber.” – Terry Stewart, Mississippi guide

Grenada. “Grenada has been hot and should continue to be really good this fall. Water will be dropping and fish will be more congregated but can still be found all over the lake. Almost any technique can be used.” – Stewart

Enid. “This is my favorite lake because of the numbers of fish and many will be 1.5 to two pounds. Longline troll, spider rig and LiveScope methods are all good here.” Stewart

Sardis. “The lake has been really good fishing this year. Fall fish are moving from the deep drops so I recommend slowing down and checking shallow water areas.” – Less Smith

Arklabutla. “There are fish that can be caught deep here but I’ll be in the shallow water, about five feet deep, because there are a lot of fish there, too. Arklabutla gets pulled down hard and it’s a very shallow lake, so people need to be cautious when navigating or they’ll quickly get trouble.” – Smith