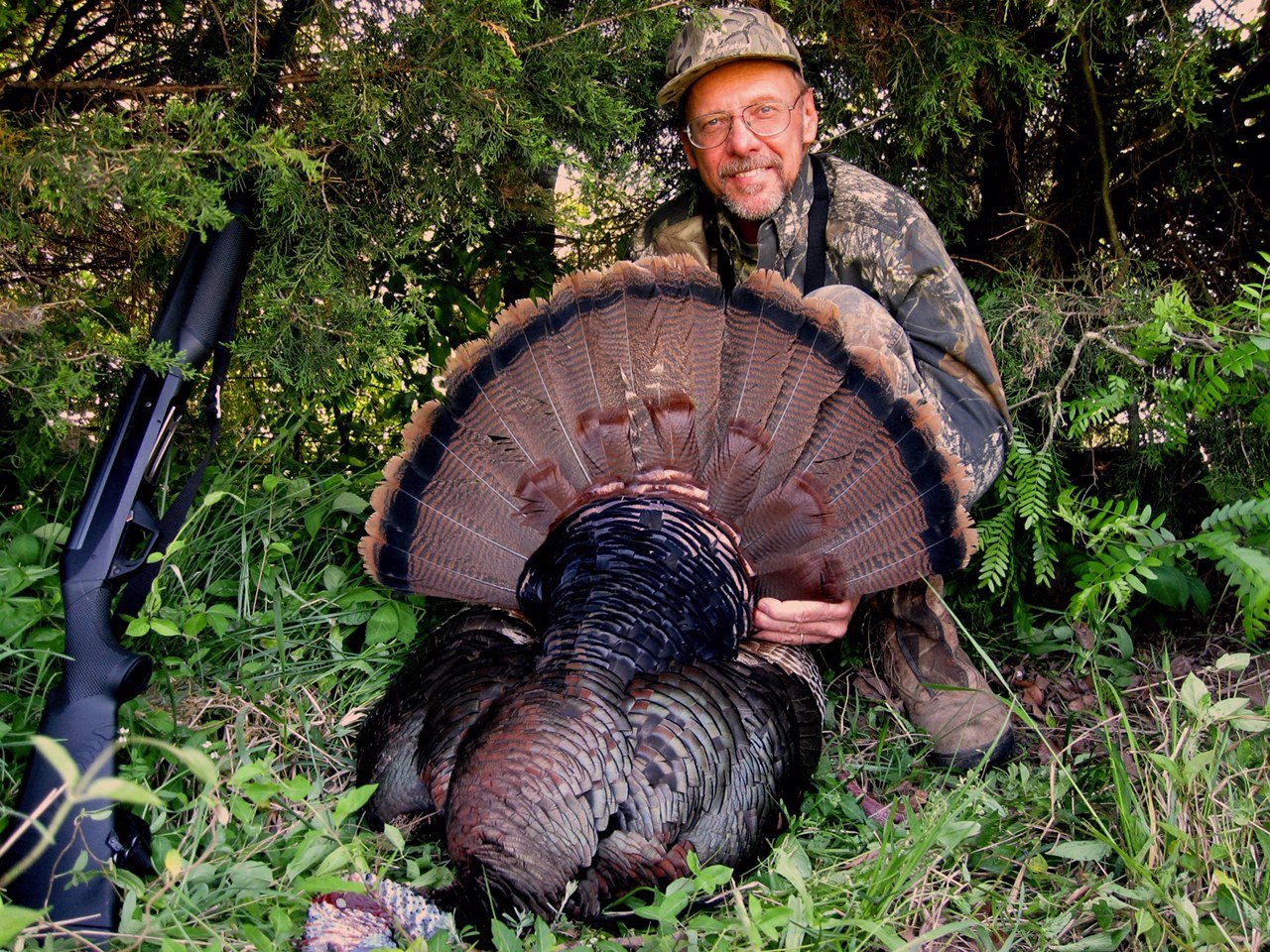 It was opening morning and the gobblers were muttering in the forest’s back-lit silhouette. They had the air of street gangs, all threat and menace. Tough. Bad. All the ladies belonged to them.

I scratched a suggestive little flirt with the old Lynch, just to let ’em know I was there and rather approved of their rough language.

This was good. It was really good. My decoys were in the open woods behind and to the left of me. Being at the edge of the field, I was smack in the middle of where these big fellows would want to go.

After the toms hit the ground, I played a few sweet melodies, country music mainly, full of lost love and tears. I almost put the Lynch under my chin and stroked it like a violin and felt so good my hunter’s spirit was clicking an Irish jig.

Five gobblers came down the fence line, locked side by side, bragging about who had the biggest fan, suspicious and puffed up, gobbling, country birds, showing off their tattoos.

Then out of nowhere, a chorus of gobbles rang up behind me. I was sandwiched between two rival gangs of turkeys. This went on for several minutes, the ones behind me coming closer and the ones in front hung up beyond shooting range, daring that other bunch to rumble. What to do? Turn around and scare the ones in the field? Or, stay put and let a whole parade of turkeys pass behind me?

I sat still. Rock still, with the gun propped on my knee and pointed at a hopeful part of the field. There was a boiling mass of gobbling, a Rachmaninoff crescendo of gobbling, a booming musketry of gobbling. I was sitting between two gangland mobs coming together for a war with me and my little ole shotgun in the middle.

Closer they came. It was all just about to happen.

Then, my cell phone went off.

And that was the first day.

I had forgotten my flashlight. Lost it, really. Many of my best and most favorite things are someplace I do not know about. I must have been there because I’ve put stuff there. And, I guess I had good intention of going back and retrieving the stuff later. But I never did because I cannot find that place. I only go there to leave stuff, I guess. Anyway, my flashlight was a case in point.

Going in blind in the dark was difficult but I was well practiced. At one point a rabbit thrashed out from under my feet and an infarction ran right out of my chest and up the side of a tree. The rabbit continued to thrash until I realized the rabbit was a snake. I suddenly found myself on a limb sitting beside my infarction. It seemed glad to see me.

Once I managed to get me and my heart back to earth, just as I began to crest a small ridge, several gobblers began muttering. I was forced to plop down in the first spot I could find. So, instead of being at the crest of the ridge, I was behind it, unable to see the vast landscape of turkeydom just beyond.

After what seemed like hours of gobbler-sound coming from every direction, three heads popped up over the horizon. A couple of insubordinate ears, both in total disagreement over which way they were coming, had me wrapped around myself, three saplings and the gun, looking like a pop-eyed rubber band twisted around a toothpick. I shot and spun like a balloon suddenly let loose.

And, that was the second day.

It was foggy. The far edges of fields were shrouded so densely I could walk right across the field to the middle of the hourglass where the woods pinched in. These guys always passed through the hourglass. Always.

Suddenly, magically, right behind that last banshee-challenge, five gobblers slowly materialized as if walking into focus, slowly coming my way. But they did not come far enough. They did not come to the hourglass. They crossed the fence line exactly 67 yards away and with several steps they were into the neighbor’s field and as effectively cut off from me as if they’d disappeared behind a wall

And, it was the third day.

I’d made a big round. Walked all morning, Then, cross the field I saw a gang and one big fan. I plotted a strategy and took off like a bootlegger on the run.

An hour later I crept to the top of the great berm that surrounds the field. Face down amongst the weeds and grass I inched down the incline, idly wondering if maybe cottonmouth moccasins lived on this particular berm. I kept a close eye on the field, hoping no sentinel’s periscope was up; and once halfway down, in super slow motion got my legs around and leaned back against a convenient boxelder. A screen of lush green honeysuckle and leaves were placed perfectly. This was a natural blind.

I waited. The hens were beginning to leave the field, off on their own errands, leaving the lonely boss man behind. I called.        Not having any company at the moment, the big gobbler turned and nonchalantly began fluff and peck his way my way.

Suddenly, I heard popping and clucking behind me. A hen came running into the field like an old washerwoman with her skirts hiked up. She jogged around pretty upset some new gal was in town and began an Egyptian walk down the side of the field away from the gobbler.

There were two jakes tagging along right behind and that just would not do. The big gobbler streamed his feathers down and came at them like a mad goose, neck all stretched out and I swear, hissing like a drill sergeant after three AWOL smart alecs. He flogged ’em good and they scattered like windblown leaves. Then he turned to follow the hen. He passed the leafy screen with my bead locked on his head.