Most of our “Legends” are ordinary folks that, through, passion, dedication, and hard work, have made their mark on our “Great Outdoors.” This month’s “Legend” is one such personality. I’ve known Billy “Boondocks Bassin” for nearly 25 years. In fact, he worked with us here at MSHFN around the year 2000 and was our top-ever subscription sales person at the local boat shows. He once had to skip a show to fish a big tournament on Ross Barnett Reservoir on a cold, windy day in February. He won that event and his $4,000 check was way more than he would have made selling subscriptions. Interestingly, his winning lure was a black buzzbait fished in an old oxbow off the main lake in below freezing weather!

Billy began his fishing career at an early age, fishing with his grandfather. They would buy 100 crickets and tried to catch one fish on each. He gradually began bass fishing and at age eight, caught an eight-pounder on a chrome and black Pop-R, using his trusty Zebco 33. He still has that lure and the mounted bass. Each Saturday, his granddad would take him to nearby Somerville, Tenn. where he was allowed to buy one lure. He would dream of the next lure all week afterward. 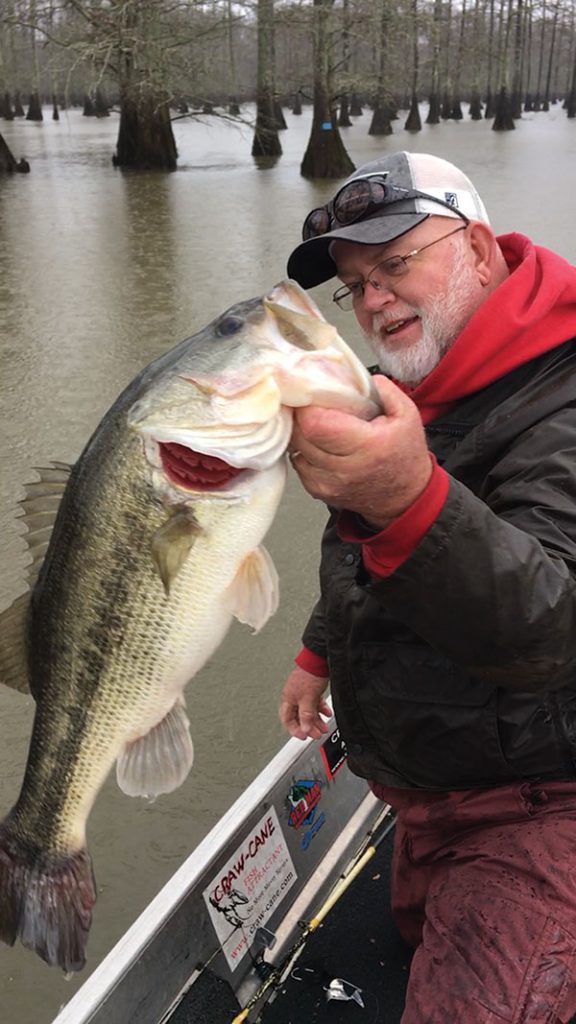 Naturally, when he entered high school, he became distracted by playing football and–girls! He also began playing drums in his Dad’s band. He soon married and graduated to a bait-caster, mostly because his wife was better at that than he was. Hmmnn?

He began fishing tournaments as a no-boater in several charity events. His competitive bass fishing began in the early ’80s in the Hatchie Bass Club out of Whiteville, Tenn., where he met a new fishing friend and Hatchie specialist, Jerry Rhodes. At the time he was working at a lumberyard and quickly made another influential friend, Buck Gardner. Buck’s specialty was making duck calls, but was a partner with Carl Graham in Hog Rustler Lures. Billy became a road-man for Hog Rustler and began fishing more club and charity tournaments.

A little later he bought a Javelin bass boat with a 150 Evinrude and began fishing the old Red Man events. He qualified for the 1995 All American Classic on the Ohio River near Huntingdon, WV. He was very optimistic about his chances. He, in practice, with the help of a local pilot, had found a clear backwater pond off the main channel. A big rain had occurred that muddied up the channel. He made the 75-mile run to his honey hole only to find the river had fallen so much, he couldn’t get back into it. Remembering this, he recently decided to fish the BFL Ohio River Division, where he hoped to be successful. Again. the River was a jinx with only a few small fish and a ton of huge, jumping carp.

Now, he is concentrating on his “Craw Cane” fish-attractant business and fulfilling orders from coast to coast. He recently obtained his Coast Guard Captain’s license and guides on his beloved Wolf River, Kentucky Lake and Pickwick. He is also concerned, like most of us, about the carp problem, and the causes of our drastic, local stream fluctuations. Many believe that the water table, in dry years, is being negatively affected by the extensive use of irrigation pivots. Other causes may be, as some believe, that no-till farming practices allow heavy rains to run off quickly into creeks and ditches, rather than being absorbed by, older row crop techniques. Billy also has noticed that, since the construction of I-269, the Wolf River drains out of the bottoms much quicker making recreational navigation more difficult.

We at MSHFN are proud to salute another Mid-South Legend Billy Doyle. Billy can be reached on his face book page or by calling 901.497.1577.