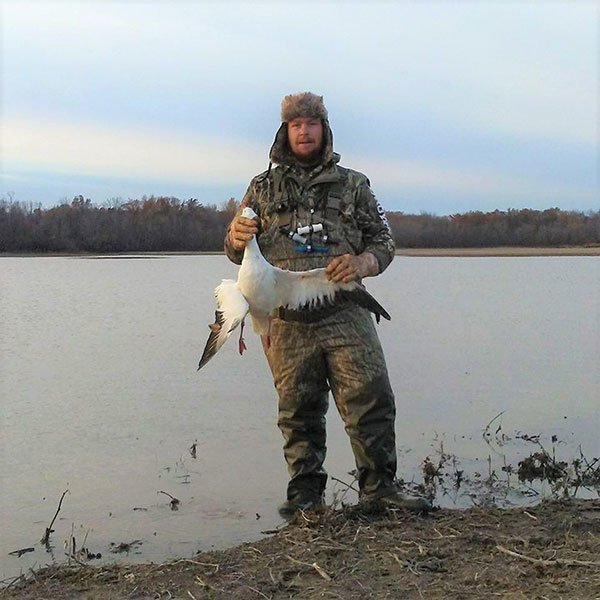 In a news release from the U.S. Fish and Wildlife service out of Lakewood, Colorado back in February of 1999 the service implemented two rules that began a historic multi-national effort to save fragile arctic habitats from irreversible damage caused by exploding light goose populations.

The rules gave certain states the flexibility to allow the use of normally prohibited electronic goose calls and unplugged shotguns during the remaining weeks of their light goose seasons that year.

Those states were also given the authority to implement a conservation order under the Migratory Bird Treaty Act that would allow hunters to take light geese outside of traditional migratory bird hunting season frameworks.

The Service’s action began to address an ecological crisis caused by an explosion in mid-continent populations of lesser snow, blue and Ross’ geese, collectively known as “light” geese.

Light geese feed by pulling up and eating the roots of plants, a natural practice known as “grubbing”. At healthy population levels, grubbing actually helps stimulate plant growth in salt marshes. But competition for food has pushed geese to over-graze these areas, denuding large swaths of vital summer plant growth. Scientists believe that this habitat degradation, which takes years to recover in the short arctic growing season and which, in many areas, may be permanent, has contributed to declining populations of more than 30 other migratory bird species that share the breeding grounds. 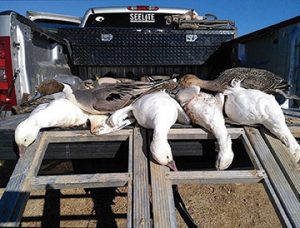 The plus side to this way is basically they do the scouting for you and know where the birds are. They also do the decoy work for you. Large numbers of decoys are often required to have a good hunt. Not only is this expensive, it’s time consuming.

Some hunters prefer a different approach to the overpopulation problem. They use legal magazine extensions, lots of ammo, and have a willingness to do a little work, then they sneak up as close as possible and then kill as many as they can in one volley. This practice is commonly called “jump shooting” or “ambushing.”

Both of these methods can be very effective but do require some scouting and a bit of work. In many areas you can actually “do it yourself” and there is quite a bit of private land that you can hunt. Gaining permission for much of this land is as simple as knocking on a door.

A flock of 20,000 to even 30,000 or more snow geese can literally wipe out an entire farm of crops such as winter wheat, literally overnight.

Hunters are more than welcome at many, if not all, of these types of farms.

In many cases waterfowl can be an additional avenue for revenue for a farmer / landowner through leasing parts of their property out for hunting. Regarding light geese, they are considered a nuisance and many of the farmers / landowners are just grateful to have them killed, or at least run out of the area through hunting pressure.

In Tennessee during the conservation season ONLY:

A free light goose conservation season permit is available in late January on the TWRA website. www.tnwildlife.org
· Hunters are required to report their efforts at the end of the Conservation Season.

The Tennessee Light goose conservation season is from February 15 through March 22, 2020.

Season dates and daily limits do vary so if you travel out of Tennessee to chase the light geese be sure to check with the individual states to ensure you have the proper license’s and are aware of the daily limit requirements.