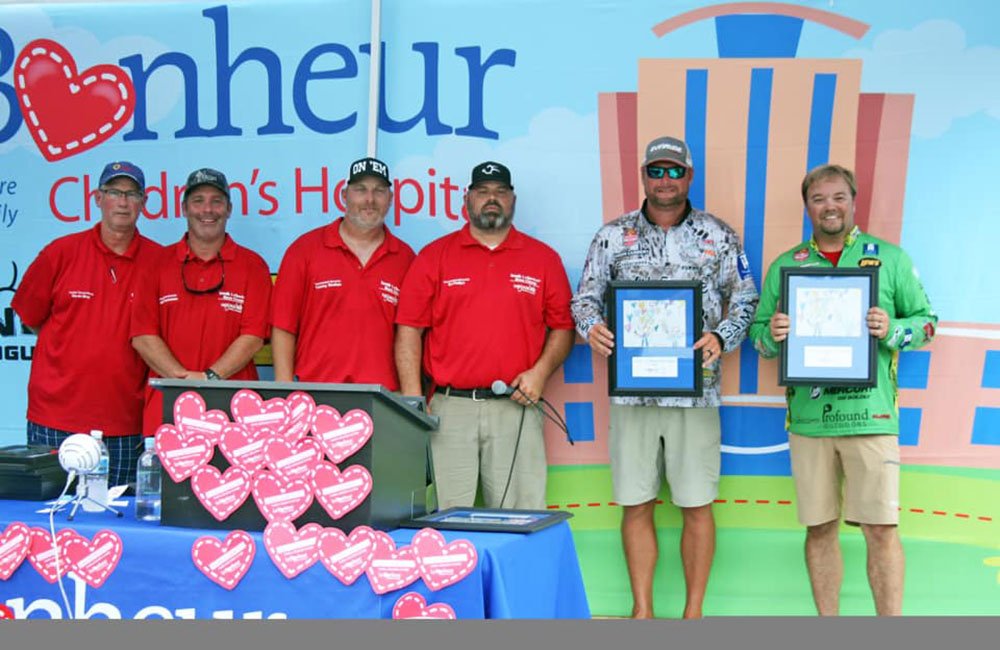 This fun family event, hosted by Hookbone Fishing League, was held in Counce, TN on Pickwick Lake. This year they introduced LeBonheur Legends to get the community more involved in this wonderful event. Anglers were encouraged to join this fundraising event, as not only were they raising money for the children, but benefits came with taking on this extra challenge. The requirement to be part of LeBonheur Legends was that each angler had to raise $1,000 prior to the tournament. Encouraged to ask friends, family, and associates to donate to Le Bonheur, and remember that it’s a charitable tax write-off, brought the top fundraisers VIP treatment during the tournament. Nine anglers accepted the challenge and together raised over $20,000!

Friday night before the tournament kicked off, John Schneider (Bo Duke from Dukes of Hazard) was on hand to speak about The Children’s Miracle Network (CMN) where he and Marie Osmond serve as co-founders. He was happy to be part of a meet and greet where he spoke about the birth of CMN and the good things it represents. The Children’s Miracle Network works to keep the local funds raised, local. CMN partners with over 170 hospitals worldwide. LeBonheur, our local hospital is one of the ten original hospitals that partnered with CMN.

Pickwick Lake was dotted with 186 boats participating in the tournament where Major Fishing League pro Timmy Horton served as MC during the weigh-in. Horton is a five time Tom Bass Master champion and a former Bass Master Angler of the Year as well as host of Timmy Horton Outdoors on The Outdoor Channel. One highlight of the event was when Timmy, a Pickwick native from Muscle Shoals, AL, donated an autographed jersey and fishing rod to the auction. An anonymous bidder awarded the jersey to LeBonheur patient Ronnie Lambert II who was in the crowd. Ronnie is 19 year old senior at Tishomingo County High School.

The event raised just over $76,000 for the Children’s Miracle Network and LeBonheur Children’s Hospital through entry fees, auction items, and the “LeBonheur Legends” anglers.