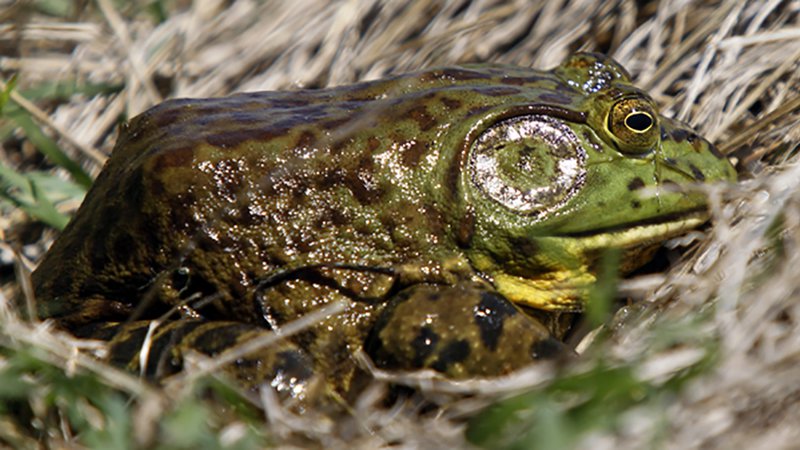 LITTLE ROCK – Winter’s last gasp may keep some frogs quiet during the night this week, but bullfrogs should be sounding off at night again soon, and frog-gigging fanatics will be back to chasing them on ponds and lakes throughout Arkansas. Bullfrog season opened April 15 and will run through Dec. 31.

It may not come with the fanfare of opening day of deer season, and no one’s ever joined a “gigging camp,” but the men and women willing to put forth some effort can be handsomely rewarded for their “legwork.”

In Arkansas, only bullfrogs may be harvested, and a valid fishing license is required. The limit is 18 frogs per day, measured from noon one day until noon the next day. Bullfrogs may not be sold except by fish farmers with a valid commercial bullfrog permit. 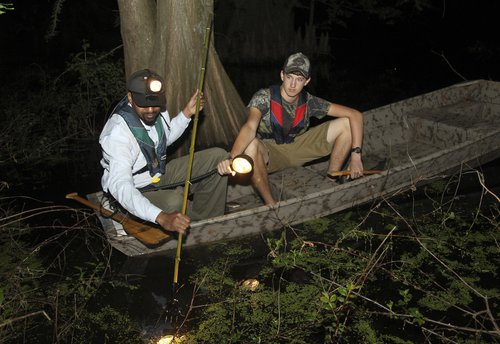 Frog gigging can be done from the bank or by boat Frogs may be harvested with archery tackle (bows and crossbows), hook-and-line, gig or simply snatching them up by hand. By far the most popular method is to use a 10-foot long pole tipped with a barbed gig point or spring-loaded jaw. Wading along the shallows of a pond, scanning the surface of the water will reveal the glowing eyes of the frogs. Froggers will keep the light trained on their prey, dazzling them much like deer in the headlights, and slowly ease within range of the frog to take a quick stab at it. If their aim is true, the frogger needs to act quickly to pull the frog from the gig and place it in a cooler or mesh sack before it pulls itself loose. Mesh bags and wire fish baskets used by bream anglers come in very handy, as they don’t give the frogs an opportunity to escape like a cooler lid being opened.

If the pond is too deep to maneuver along the bank, a small canoe or jon boat works well with an electric motor or paddle, but it’s best to have at least two in the boat. Giggers in boats can take turns keeping the light focused on the frog and paddling or controlling the trolling motor while the other gigger focuses on making a good stab at his prey. Grabbing frogs by the hand is done much the same way except that it requires you to get much closer.

Hook-and-line frog enthusiasts focus their “fishing” attempts during the day, when frogs are focused on flying insects. Using a long cane pole, anglers dangle a small fly in front of the frog, attempting to fool it into thinking it’s an easy meal. Once the frog takes the bait, the angler snatches it up quickly and adds it to their catch.

Bullfrogs can be found across Arkansas, but the heaviest concentrations usually are found along the many ponds, slow-moving streams and fish farms in the eastern half of the state. It may take some door-knocking and asking for permission, but some small private ponds can prove worth the effort once you break out the gigging gear.

Only American bullfrogs are legal to gig in Arkansas. Be sure to scan the bushes along the banks before making an approach on any frog. Plenty of spiders set up shop along the shore’s edge to catch their prey, and the webs can be a pain. Snakes also climb into low-hanging branches of brush along the water’s edge. Many tales of men walking on the water during a frog-gigging trip begin with a snake falling into the boat. While most water snakes are not venomous, it doesn’t make it any less frightening when one plops in the boat next to you. Learning what to look for in identifying a venomous snake can set your mind at ease. The AGFC has a downloadable snake guide available at www.agfc.com/en/resources/brochures, or you can visit www.herpsofarkansas.com, a nonprofit website devoted to the study of reptiles and amphibians in The Natural State.

Cleaning the frogs after a night of gigging is relatively simple. Cut it in half just above the waist, then peel down the skin from the legs with a pair of pliers. Snip off the bottom feet and the legs are ready to be grilled or rolled in your favorite breading and fried. The old quote, “It tastes like chicken,” likely originated with a parent getting their child to eat frog legs for the first time. Anyone who’s enjoyed these treats from the swamp will tell you chicken doesn’t compare to the flavor and texture offered by this treat that’s the ultimate in organic, locally sourced protein.