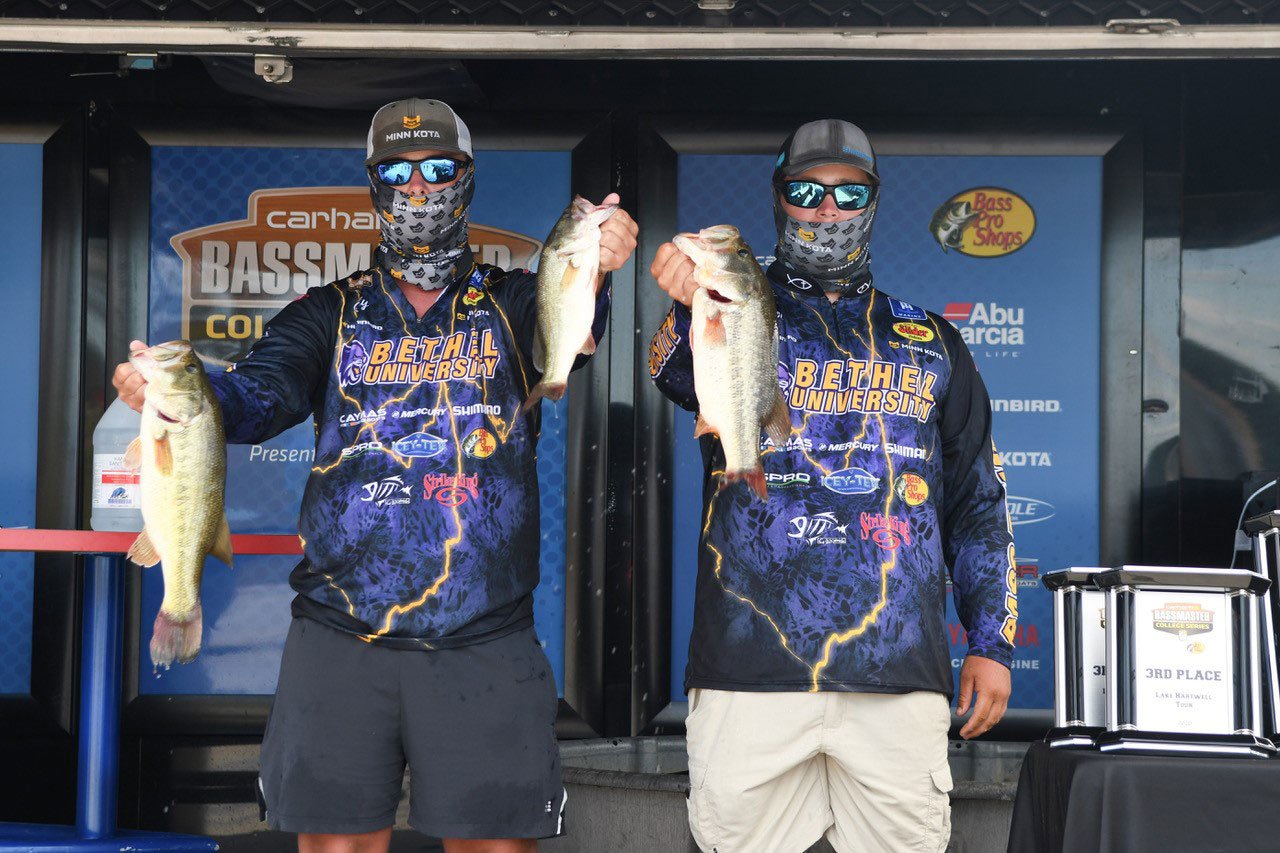 ANDERSON, S.C. — Bethel University claimed its second Carhartt Bassmaster College Series presented by Bass Pro Shops title this week as juniors Cody Gregory and Levi Mullins rallied from eighth place to take the victory on Lake Hartwell. The pair posted a three-day total of 26-8 thanks to a 10-pound, 1-ounce, three-fish limit on Day 3, the heaviest of the day.

Grayson Morris and Jacob Pfundt of the University of Montevallo finished the tournament in second place with a three-day total of 25-1, while Grant Adams and Wil Rigdon from Campbellsville University rounded out the Top 3 with 24-14.

The win comes just over seven months after teammates Cody Huff and Dakota Pierce were victorious at the first event of the 2020 season at Toledo Bend.

Gregory and Mullins earned $1,417 for their school and also earned the $500 Garmin contingency award. This is the first cut the duo has made as a team and their first National Championship qualification.

After what he called a terrible practice, Gregory said he and Mullins settled into an area 20 minutes up the Tugaloo River and milked the area for three days, which produced nine largemouth big enough to secure the win.

Flipping a California 420 colored Zoom Z-Craw and a California Love colored Missile Baits Baby D Stroyer paired with a 1/4-ounce tungsten flipping weight generated the most bites throughout the week for Gregory and Mullins. After finding a crawfish with an orange belly in the livewell, they also dipped the tails of their baits in chartreuse and orange dye.

The first two days, Gregory and Mullins couldn’t get the higher quality bass in the boat but generated plenty of keeper bites, Gregory said, ending Day 1 with 9 pounds, 3 ounces and Day 2 with 7-4.

After their buzzbait bite fizzled out early on Day 3, Gregory and Mullins switched to their flipping baits and quickly caught three fish to complete their limit around 9 a.m. A little less than an hour later, Gregory said Mullins hooked a 5-pounder and fought it all the way to the boat before it broke off around the trolling motor.

“We were like, ‘There goes our tournament win right there,’” Gregory said. “We were stressed out all day, but it seemed to come together at the end, I guess.”

With calmer weather prevailing for the first two days of the tournament, Morris and Pfundt targeted brushpiles within a 10 minute run of Green Pond Landing using their Garmin Panoptix unit. They found success calling those fish, both spotted and largemouth bass, out of the brush with topwater walking baits, specifically a Lucky Craft Gunfish and a Reaction Innovations Vixen.

Day 3, however, brought the remnants of Hurricane Laura through South Carolina, which produced 30 mph winds at times across Lake Hartwell.

“It was really windy and (the lake was) white capping,” Morris said. “We had been fishing offshore all week and getting them to come up because it is a big herring lake. We weren’t sure if we were going to be able to do that today. Because of the wind, you can’t work a spook.”

While the wind prevented Morris and Pfundt from throwing the topwater, the duo had their best day of the tournament throwing a Sebile Magic Swimmer, a jointed swimbait that Morris had never used prior to Saturday morning.

“I got it out of the package today and now it has the paint taken off of it. I was shocked (they bit that well), because we got out there and were really concerned and didn’t know how we were going to catch them today,” Morris said. “We tied on that swimbait, and within the first three casts they came up and they started biting it. We knew we were onto something. Every single pile we pulled up on we got bit.”

Timing was an important part of their bites, as well, Morris said. If they threw over a brushpile and didn’t get bit after three casts, they would move to the next brushpile in their rotation.