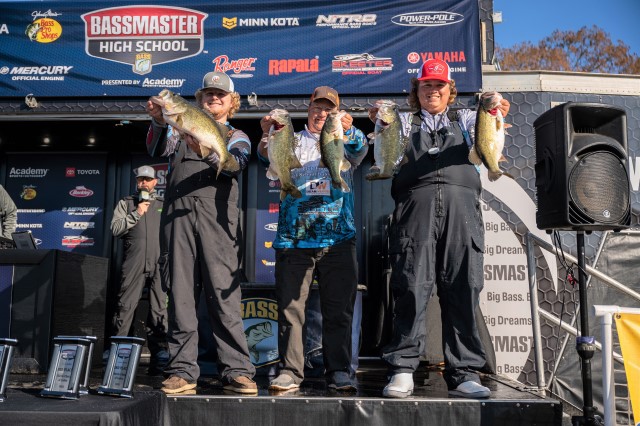 LEESBURG, Fla. — Bryce Balentine and Dalton Loos of the Central Florida Youth Anglers employed a balanced game plan based on quantity and quality to win the Bassmaster High School Series at Harris Chain of Lakes presented by Academy Sports + Outdoors with a limit catch of 25 pounds, 6 ounces.

Edging the second-place Sale Creek Anglers team of BJ Collins and Banks Shaw by a margin of 2-7, Balentine and Loos earned $770 each and a spot in the 2022 Bassmaster High School Series National Championship presented by Academy Sports + Outdoors. (Dates and location TBA). Shaw and former partner Gage King won the 2021 National Championship.

The winners spent their day in Lake Griffin and fished a 100-yard area of offshore grass in 9 to 10 feet. They chose their spot based on its seclusion and familiarity.

“We just wanted to get away from the crowd,” Loos said. “We’ve had history out there, so we went ahead and ran it.”

Balentine and Loos started their day fishing 1/2-ounce black/blue Z-Man ChatterBait JackHammers with green pumpkin swimbait trailers. Later in the day, they switched to a slow dragging presentation with Zoom Old Monster worms in the redbug and junebug colors Texas rigged on 5/0 hooks with 1/8-ounce weights.

The ChatterBaits earned Balentine and Loos a limit by midday. Then when the emerging sun warmed the lake, those big worms allowed them to make significant upgrades.

“When those fish are all lock-jawed, you put that big bait in front of them, they can’t resist it,” Balentine said.

Balentine, who placed third at last year’s event with Carson Russell, said it felt good to close out the win by fishing the same way he did in 2021.

“I just stuck with my gut and did what I know,” he said. “This is the biggest tournament I’ve won. It means a lot. It’s awesome. I have jitters, I’m still shaking.”

Loos said their win was especially meaningful, following a very difficult practice. “I fished a whole day and caught no fish.”

Collins and Shaw also targeted Lake Griffin’s offshore grass and boated a limit of 22-15. They caught all of their fish on 3/4-ounce white and chartreuse Strike King spinnerbaits with large willow-leaf blades.

“We stuck with a spinnerbait all day because we knew we could get five of the right bites doing that,” Shaw said. “We actually ended up catching a lot of fish. We didn’t lose any fish, we didn’t miss any fish, we caught everything that bit.”

Collins said he and Shaw had fished their area in previous visits to the Harris Chain, so they felt comfortable that they knew how the fish would position. Shaw noted they consistently caught better fish by monitoring their Humminbird 360 to detect key features.

“It was definitely the grass that was a little bit higher,” Shaw said. “The grass could be 4 feet high right here and 5 feet high right there. We just used 360 and Garmin LiveScope to find those sweet spots that nobody else saw.”

Peyton Sorrow of the Eagle Eye Anglers fished alone and finished third with 16-11.

The tournament was hosted by Lake County, the City of Leesburg and Greater Orlando Sports Commission.