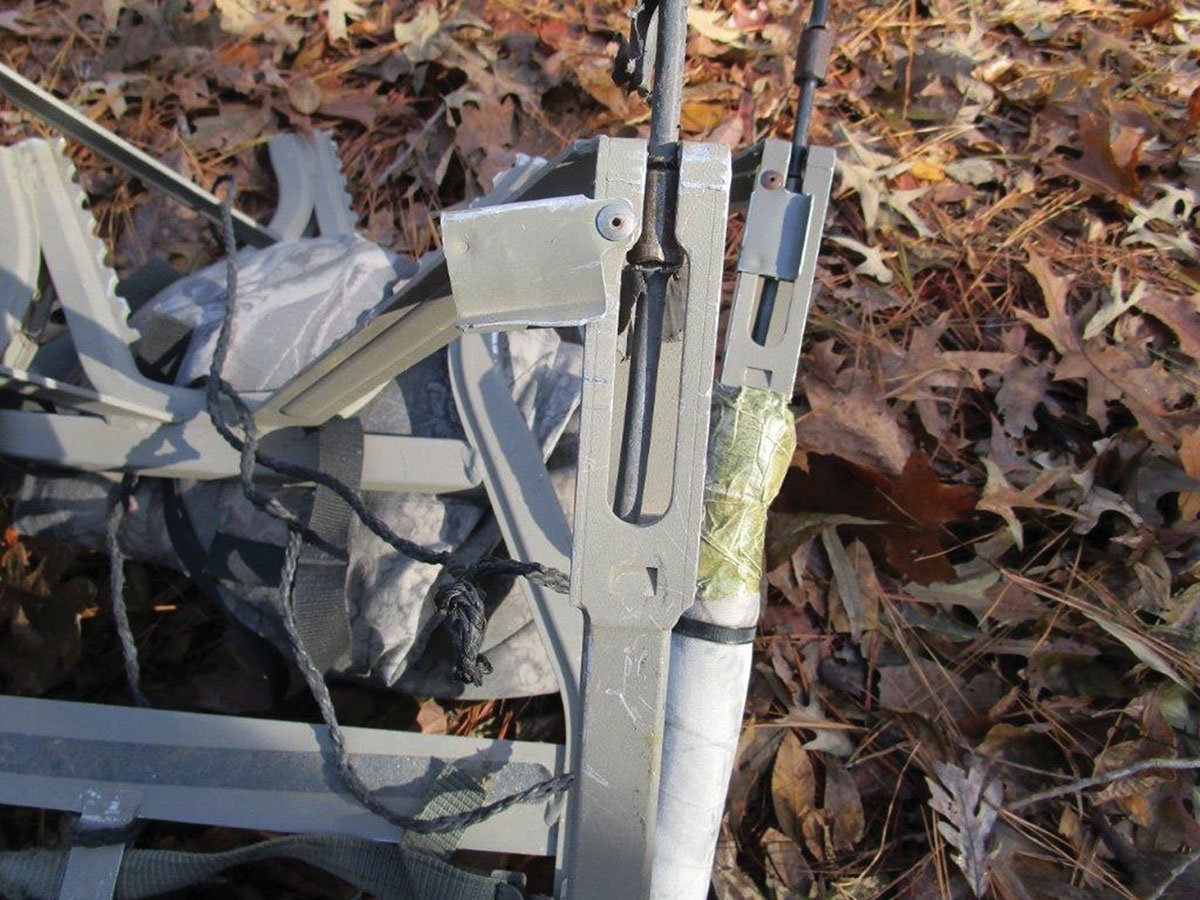 If we cannot escape our own stupidity, and who is the man who does not have some, what then is left to protect us? What some might call the fates, others luck, or the stars, I choose to call being blessed. If I am indeed fearfully and wonderfully made, I figure my guardian angel is checking the blueprints to be sure my mental circuity turned out right.

Once daylight arrived, I realized this was not the place to be. A deer would be on me before I could get ready. Then the wind picked up and I lost interest quickly.

About 9 a.m., I began the routine of getting down. First, gun unloaded and lowered.

The harness rope was wrapped around a limb above me and to avoid the wrangling of taking it off, detaching, re-noosing, I just threw it to the ground.

I was inching down when the footrest slipped. While working to get it back up, I saw the flexible wrap-around rod—the one that holds it to the tree—swing loose like a lazy tail. 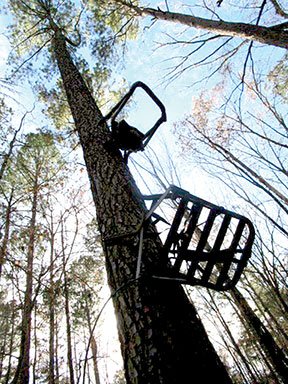 My very first thought was, “Hey, this is me, and this not supposed to happen.” Then, I thought, “Can I get back up and onto the upper part?”

With the footrest still attached to my boots, the answer was, “No.”

I kicked it off and with my elbows about level with my glasses, I looked like I was holding on with my chin. I felt sure I had the raw strength, but also figured any upward contortions, any gymnastic swings or uneven straining and the upper part of the stand might pivot and dump me.

All that happened next, happened way quicker than you can read this.

It was either up or down. I decided not to hang around. This was going happen right now. The tree was big, too big to lock arms around, but I thought I could strong-arm it enough to slide down.

I made a monkey leap that I do not remember, but it must have been pretty cool, and got my arms partially around the tree. The thing is once you start, there is no cartoon pause, no little bit of time to get situated. You are simply gone.
I managed to get a bit of a hold on the tree. On the way down, I only remember thinking “I’m going too fast and this will ruin my coat.”

Without realizing it the rope holding the footrest was between me and the tree and suddenly my left leg caught on the rest and stopped me cold. I looked like a fellow hanging off the back of a door by one leg.
I still had both arms on the tree but was approaching upside down.

My next thought came like a geyser in first welling, with something very serious just underneath the surface, genuine fright and a thing that can boil up into panic. It was this: “I’m in trouble.”

For the next two insta-seconds I studied that piece of nylon string and its history flashed by in my mind as I judged its strength. Quickly, before I slipped again, my brain shouted, “I think it will hold.”

With a claw hold on slick rope I could pull sideways but not up-ways. With desperate snatches I was able to violently shake the footrest out from under my leg. 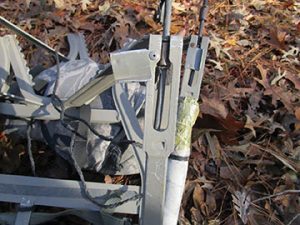 It came loose and even though that rope was like a greased icicle, for split moment I was in freeze form. Then I was gone. I do not remember the details, but my hand ran the length of the bottom portion of the stand, much like a fellow running his fingers across a picket fence, or maybe the dowels on a stair bannister. On that last bit of edge, my fingers reflex-shut and I grabbed just enough to cause a momentary purchase that could get my body upright.

Then I waited for the good earth to arrive, and thought, “It needs to get here soon.”

Good ol’ gravity. It did. Just soon enough. I stayed on my feet. But I hit the ground like a spear, and it hurt me.

I did a total system check as the pain made me bend over and grab a small sapling. Other than some ligaments and muscles that felt left over from the Spanish Inquisition and four joints and a few long bones that seemed to be of the opinion they might as well have been snapped, all seemed functional.

That little rope saved me.

And the stand did not fail. It turns out I hadn’t slid in the little piece of metal that prevents the rod from popping out.

Most of what happened is a blur. I made some quick moves that were mostly instinctual. Most of them wrong. A few odd little things ticked together miraculously to save me.

This has been sobering and I’ve touched my nose several times since just because I could and was afraid, I would wake from a dream and enter the reality of finding myself in a very bad way.

My guardian angel has, I think, asked for overtime.

I have much to be thankful for. And, I knew it when I came back with a very long stick to prod the stand out of the tree.

If something like this happens to you, there will be a split instant where you think, “Hey, this is not supposed to happen to me.” You will be right. And it will not make any difference.

Unless you are strapped in with safety gear.