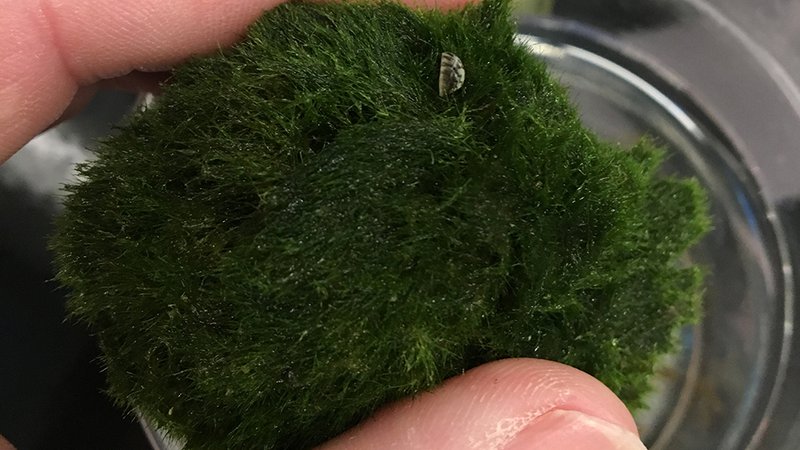 The U.S. Geological Survey published an alert last week reporting that aquarium moss plants supplied to a national pet store carried living zebra mussels. Once alerted, state agencies quickly confirmed that “moss ball” products being sold in Petco and PetSmart stores across the country were infested with the aquatic invasive species. The known scale of this spread continues to increase, with management officials now confirming reports that contaminated product was sold on online retail sites and shipped nationwide. These “moss balls” are popular with aquarium owners and sold under a variety of names such as “Betta Buddy Marimo Balls” or “Mini Marimo Moss Balls” and are sometimes included with the purchase of betta fish. Petco and PetSmart have both discontinued sale of the product and efforts are being made to further limit the spread.

Consumers are urged not to purchase aquarium “moss ball” plant products and to safely dispose of any that have been recently purchased in accordance with state regulations. Improper disposal is one of the most common ways invasive species are introduced into the environment and the results can be catastrophic, particularly with zebra mussels. As adults, these fingernail-sized mollusks are estimated to cause one billion dollars in damages every year. In other life stages, zebra mussels are undetectable by the naked eye. The U.S. Fish and Wildlife Service advises anyone who has recently purchased a moss ball aquatic plant product to adhere to the following guidelines to ensure all life stages of this invasive species are destroyed:

DESTROY, DISPOSE, DRAIN
Do not dispose of the moss balls in drains, waterways, or gardens. Moss balls must be destroyed and disposed of in a sealed container in the trash.

When following any of the methods listed below, ensure that the disposal method you choose is in compliance with your local state laws and animal welfare regulations.

DESTROY in one of three ways:

DISPOSE of the moss ball and any of its packaging in a sealed plastic bag in the trash. If vinegar, boiling water, or bleach was used, the liquid can be disposed down a household drain — never down a storm drain where it could enter and damage local waterways.

DRAIN and clean the aquarium.

Collect any fish or other living organisms and place them in another container, with water from a separate, uncontaminated water source. Sterilize the contaminated aquarium water by adding 1 cup of bleach for each gallon of water. Let the water sit for 10 minutes and then dispose the sterilized water down a household drain.

Clean the aquarium and accessories using one of the following methods, ensuring that the disposal method you choose is in accordance with manufacturers’ recommendations:

Hot Water Method:
Use water that is 140 degrees F to flush and coat the tank and all accessory surfaces for at least one minute, OR
Disinfection Method:
Submerge the moss ball in 1 cup of chlorine bleach per gallon of water for 10 minutes or undiluted white vinegar for 20 minutes.
Soak the aquarium, substrate, rocks, décor, and filter media in the bleach water solution for 10 minutes.
Rinse off all items prior to setting up the aquarium.
Dispose of the previously used filter media and replace with new media.
Use a dechlorinating product to neutralize any residual chlorine prior to reintroducing aquatic life.

It is recommended that you do another water change within a week and continue to monitor the tank for any unusual or unexpected aquatic life.

A more detailed list of DESTROY, DISPOSE, DRAIN instructions can be found here.

“We see the devastation caused by zebra mussels in systems such as the Great Lakes,” said Ron Regan, Executive Director of the Association of Fish and Wildlife Agencies. “State agencies and our federal partners are fighting an uphill battle against invasive species and this underscores the urgent need for more public attention, increased resources, and new management tools to stop them from spreading.”