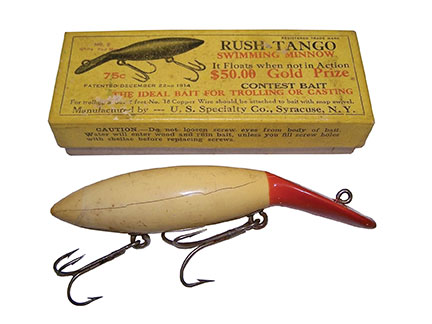 Years ago, when bank fishing was the norm, one had difficulty using a tail dragger. Why? Because a tail dragger is a lure that goes deeper when retrieved and fishing from the shore means the lure will soon dig into the bottom not long after the cast. Not a bad scenario if you’re standing on a rock outcrop with deep water below you. In most cases, a farm pond will not be that way and soon after you cast, the lure will either dig into a slimy bottom, or snag, which is unlikely due its main feature of being practically snag proof. 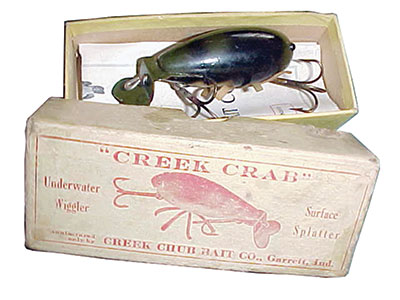 The small family of tail draggers was inspired by the original, “Crab Wiggler” made by Creek Chub, in the 1920s. The Heddon Rush Tango soon followed along with others from a myriad of lure companies after WW1. The venerable old lures are now valuable collector’s items. All had wooden lips made from the body of the lure. This also meant that they were subject cracking with continued use and vulnerable to damage by hidden obstacles such as rocks and logs. In 1947, shortly after WWII, Ike Walker, JohnWalker, and Charles Parker were fishing nuts. They primarily fished Lake Murray, near Gainesville, Texas. Lake Murray was and is a deep, brushy lake known for capturing many a lure hung on the limbs of sunken tress. The inventors began experimenting with crank baits that would dive deep, glance off limbs, and slowly rise and back off the snags. The metal lip proved to be the best, but the favored wood that would float, hold screw in hooks, and be more damage resistant was white, northern cedar. The telephone poles of the day were made of this and the local phone company donated all they needed. They even had to use recycled hooks from old lures due to the metal shortages. This material was a guarded secret for years. 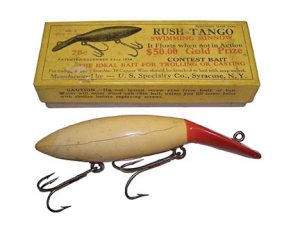 The success of the original bomb shaped lures promoted a run on these deep divers, that would dive quickly and wiggle “like Hell”. The basic color was black and they were made in three sizes. The demand was so great Bombers were being hand made in lots of one thousand a day! In 1976, Bombers were being made of plastic with rattles inside. These were not as buoyant as the wood models but still very effective. Copycat lures soon hit the market, the most popular being the Arbogast “Mudbug” which is still in production. The biggest advantage of plastic over wood is availability of the color selections and the rattles. Both still have the metal lips that rarely need adjusting and are more durable than plastic.

If you feel a change of pace is needed in your late winter and early spring fishing while you are concentrating on brush and stumps, try tail draggers. They can be used as slow walkers though limbs, rocks, and stumps. My latest use was in the Hatchie Bottoms when I used an antique, four hundred size, Christmas-tree color to pull a six pounder out of a treetop in four feet of water. I also carry a rarely used, lure retriever, when I cast these treasured lures. Good Fishing . MSHFN.