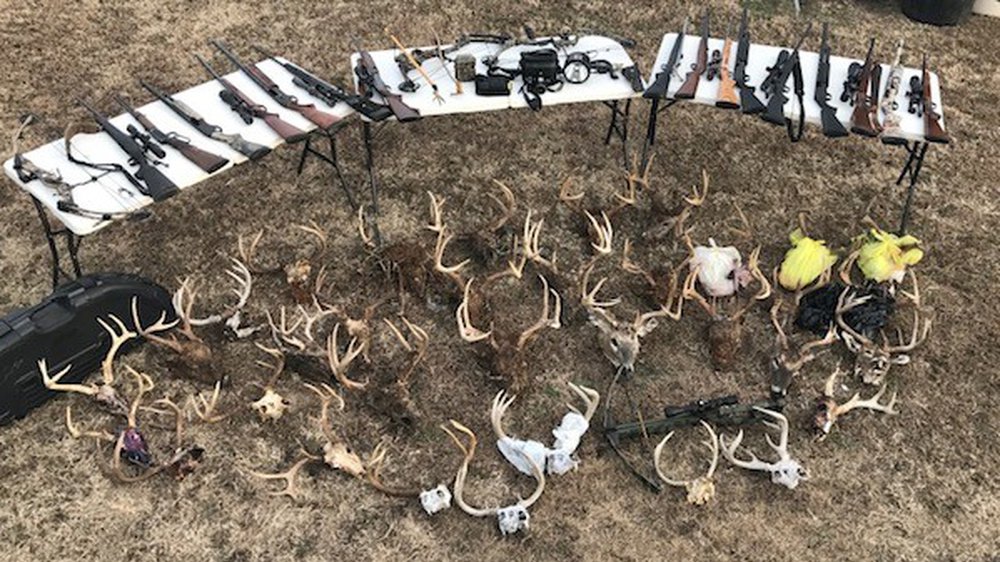 JONESBORO — With the outdoors as their office, Arkansas Game and Fish Commission wildlife officers often work with unusual crime scenes, as poachers often go to extreme lengths to hide their crimes from weather and animals as well as the watchful eyes of neighbors and other hunters. In 2016 Sgt. Jeff Dalton and Cpl. Bret Ditto found one of the most unusual and fertile evidence discoveries of their careers, a literal garden of skulls from illegally poached white-tailed deer.

The two wildlife officers at the AGFC’s Jonesboro Regional Office had received many reports of poachers road hunting at night, but were unable to respond in time to catch any suspects in the act.

According to AGFC Assistant Chief of Enforcement Maj. Brian Aston, night-hunting and road hunting are two of the hardest poaching violations to catch because the crime usually occurs so quickly and landowners are only made aware of the activity when they hear the gunshot. By the time officers can respond, the violator is long gone. However, many poachers are creatures of habit, visiting the same areas where they were successful in the illegal harvest of game. Officers compile reports and calls from citizens and look for patterns, similar vehicle descriptions and other information to ultimately set up a late-night sting operation where they catch the poachers in the act.

As for Dalton and Ditto’s case, the volume of complainants reporting a random shot in the night increased, as did the deer carcasses scattered throughout their county. Unlike a typical poaching case, the calls received were scattered from one end of the county to the other and the “suspicious vehicle” descriptions were just as inconsistent. This led officers to believe they were dealing with multiple poachers acting independently. As the months went on, the complaints and deer began to mount.

As with most poaching cases, a call from a concerned citizen finally gave officers the break they needed to make a case that would stop most of the night-hunting issues that had been building in the county. The antlers of many deer heads had been seen sticking out of a stack of old tires outside a residence.

Further investigation indicated five suspects possibly being involved in the illegal taking of deer throughout the county. Officers Dalton and Ditto called on help from fellow wildlife officers Snr. Cpl. David Evans and Cpl. Chris Foshee. Evidence was compiled and confessions were obtained during the next 72 hours, and that is when officers discovered the “deer garden” next to one of the suspect’s residences. All of the deer heads were neatly “planted” in a row with antlers protruding from the ground.

The grisly scene may have a good explanation. Some hunters will bury deer heads up to their antlers to let insect larvae clean the skulls of any tissues, leaving behind only bone and antlers. This makeshift taxidermy method creates what is known as a “European mount” and is an alternative to taking a trophy to a taxidermist for proper preservation. Burying the head cuts down on the smell of decomposition, which could have drawn the attention of scavengers that would drag away the poacher’s ill-gotten trophies.

Officers confiscated all illegally taken game as well as 14 guns, three bows and a set of night-vision goggles as evidence in the case. The five suspects pleaded guilty to a total of 122 charges including Night Hunting, Deer Hunting out of Season, Turkey Hunting out of Season, Over Limit of Deer, Hunting from a Public Road, Prohibited Methods for Taking Turkey, Taking of Raptors, Big Game Checking Requirement, Big Game Tagging Requirement, as well as Aiding and Abetting a violation. They received $11,250 in fines, six years of hunting and fishing license suspensions, two years of probation and 160 hours of community service. The court also ordered all individuals to successfully complete a Hunter Education course.