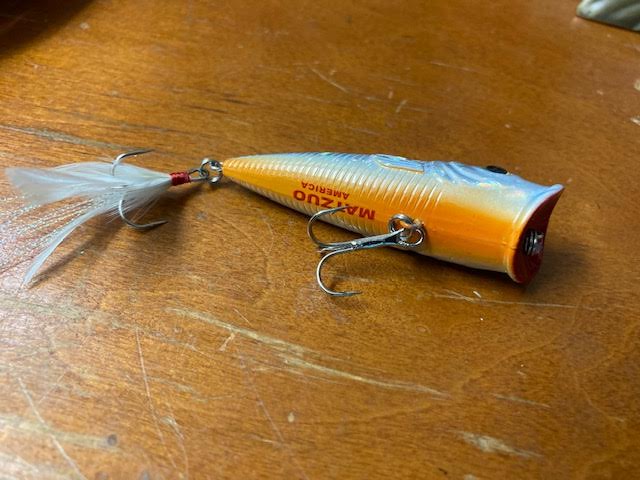 I suppose most bass anglers would agree that the blowup of a bass on a top water lure is, by far, the most exhilarating strike that can be expected. Just a few days ago, in the midst of a cool down, I solo fished a small, 25-acre lake nearby that had been deemed “fished out”. I was there as the first rays of sun were lazily topping the tree line and saw sights that would excite any fisherman. Bass were chasing minnows just out from the boat ramp. You could see them swirling through the schools of minnows and hear the frantic splashes of frightened fry trying to escape their doom. 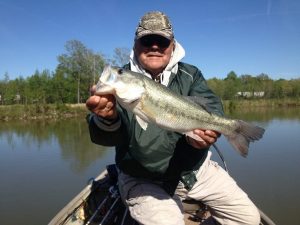 I quietly launched my 1960 Buddy Boat and began to cast a small Matzuo popper in the direction of the last swirl. This particular popper is silver with a blue back and an orange belly. I use it more as a “spitter” than a loud popper, with subtle jerks that cause it to “spit” rather than pop. I am convinced that the orange belly is a key to this lure’s appeal. Shallow water bass are very spooky; in fact, as the lure was cast past the minnows, just the shadow of it caused the minnows to suddenly scatter. The minnows were hovering in shallow coon tail moss beds and the bass were cruising the edges waiting to quickly dart in and grab a mouthful. Immediately, A fat, healthy, pugilistic largemouth attacked the lure. When boated, it still was in a bad mood and required the use of a Bogo grip and pliers to remove the trebles. Fish like that can send one to the ER in a split second.

As soon as I released that one, I cast to another swirl and, “Wham!” Another bigger bass was fighting and desperately trying to shake the hooks by jumping and running. I repeated the process of a safe catch and release. Almost instantly, another, even bigger one was fooled by that popper. For the next two hours, it was a scenario of watchful concentration on being prepared to cast at swirls and blowups. As the sun rose, the action slowed but there was still an occasional bass attack on those schooling minnows. Final count was 18 strikes, 14 boated and released. Had the bite been in deeper water, I might have had a better catch ratio, but in water that shallow, keeping bass out of the moss and having them pull off is very challenging.

All over our region, most species are in a voracious feeding mode as they fatten up for the stress of cold winter months. Bass are extremely vulnerable at this time due to the competition for food. Shad and other prey are scouring the shallows for the same reason and, its truly a survival of the fittest. In the case of baitfish, its simply a case of good luck if they survive the onslaught. Most any top water lure will work, but be aware of the effects of speed and sound. Let the fish tell you how to adjust your tempo and sound effects. The shallower the water, the more stealth is required. This includes you boat, trolling motor, and even your own profile. Be sure to check your heart rate when they turn on to your proper selection. Good Fishing! MSHFN.