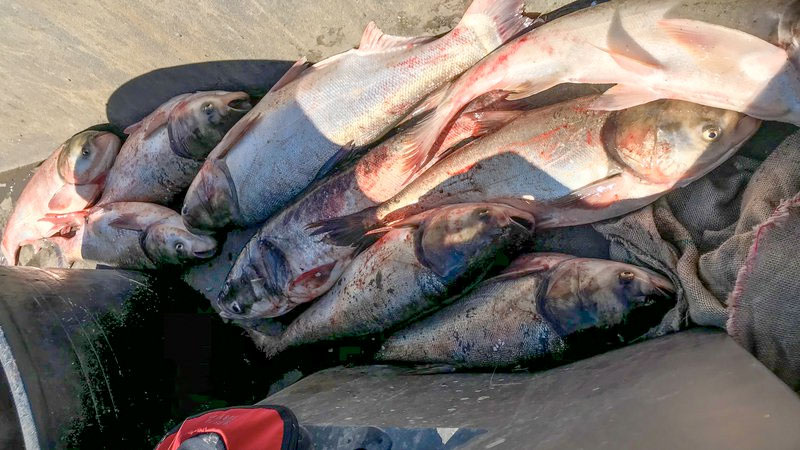 With only a few days of training, the Arkansas Game and Fish Commission’s newly formed invasive carp removal team has removed roughly 320 pounds of invasive carp from the White River in its first day of netting.

While 320 pounds is a long way from the team’s goal, AGFC Invasive Carp Biologist Jimmy Barnett is extremely happy with the results and looks forward to improving upon that mark as the staff selected for the job hone their skills on the river.

“My goal for the team is to remove at least 250,000 pounds of invasive carp per year,” Barnett said. “We have a long way to go, but every day’s work will get us closer to that goal.”

The AGFC carp removal team currently has three full-time members devoted to the effort, and are looking to fill two additional positions. When complete, Barnett hopes to have two boats outfitted and running commercial nets daily to fight the spread of black, silver, bighead and grass carp in Arkansas’s rivers.

“We’re focused on the White River right now and will work on it until it reaches flood stage, then we’ll shift our efforts to the Arkansas River,” Barnett said. “We want to make the best use of daily conditions, and right now the White is low enough to get some work done.”

The team will be headquartered in Hazen at Mike Freeze Wattensaw Wildlife Management Area. AGFC’s Wildlife Management Division worked with the Fisheries Division to make room for the additional equipment at the workshop so the staff would have a home base at the center of the two river basins in which they will work.

The new effort by the AGFC was made possible by funding from the U.S. Fish and Wildlife Service. Four grants totaling $1.2 million were received by the AGFC, including a portion directly attributed to removal of invasive carp species.

Barnett said until recently there wasn’t any federal funding available for invasive carp removal in the Lower Mississippi Basin. Instead, federal dollars were focused on preventing the spread of the species in the northern portions of the Mississippi River and its tributaries.

“That changed in 2020 after anglers and congressmen drew attention to the massive problem these fish were causing in Barkley and Kentucky lakes,” Barnett said. “New language allowed funding to be focused on the Lower Mississippi Basin, which includes the Arkansas, Red, White and Mississippi Rivers in Arkansas.”

The process to remove invasive carp from Arkansas’s waterways is long and tedious. Staff set gill nets and monitor them throughout the day, removing the targeted species and releasing any native fish that may get caught.

“We’re using a large mesh size that will target the larger carp and allow most native species to swim through,” Barnett said. “That and the constant monitoring of the nets will let us carry out our removal efforts with as little impact to native species as possible. The goal is to have no nets go unattended for longer than 12 hours.”

The removal effort is only one portion of the efforts fueled by the new federal grants. A significant portion of the funding will be used to help gather data and research on the effectiveness of removal efforts in the lower Mississippi River basin, as well as biological information on the population characteristics and movement of invasive carps.

“We also want to make sure that these efforts are contributing to a long-term solution to the invasive carp problem,” Barnett said. “But we want to remove as many as we can while we’re doing that. If we reduce the population, we reduce the chance of them expanding into new areas.”

Barnett says all nets used by the team will be marked with white buoys and labeled as belonging to the AGFC.

“We won’t be placing them in any high-traffic boating areas, but if an angler or boater does see one, we do ask that they leave them be and allow the team to do their work,” Barnett said. “We will be moving netting locations on a near daily basis, so our work shouldn’t get in the way of recreational use of these waters.”