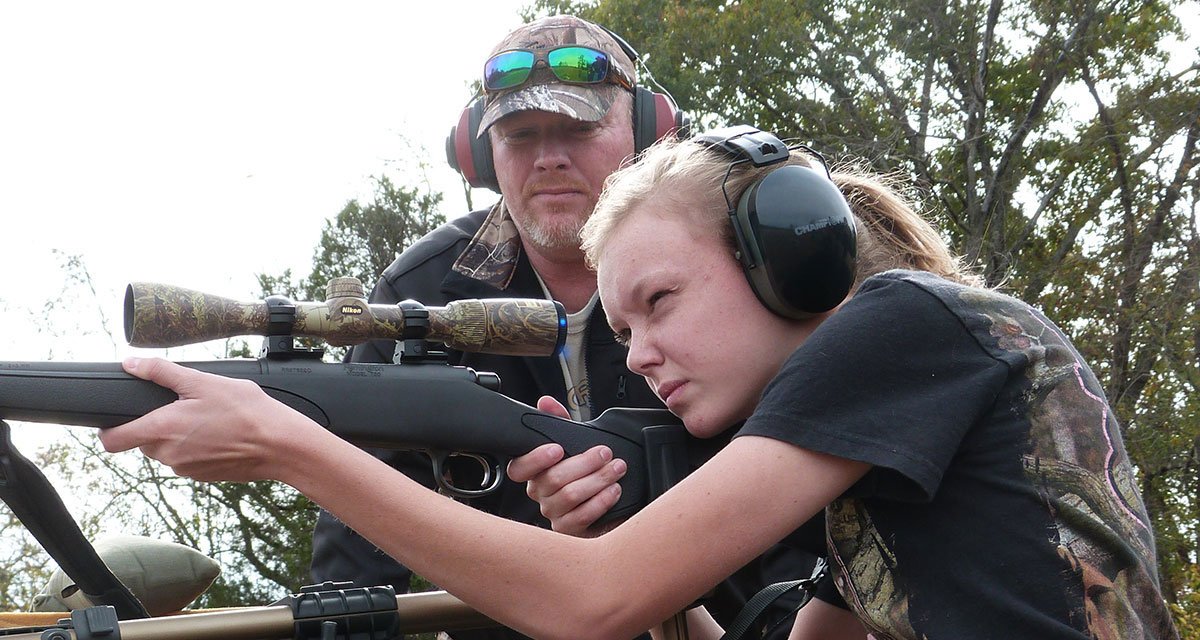 Christmas morning, and there it is, the dream of a young lifetime, a .243/06 or whatever-caliber rifle. It’s deer medicine extraordinaire.

Other than someday handing a teenager keys to the family car, there are few things that compare to the gravity and excitement of giving a youngster their first high-powered rifle.

This is big. This is important. It comes with the absolute demand for safety.

This means a lifelong partnership will be formed between the shooter and a rifle, starting on the bench, and all of that begins with a first-ever shot. During the early stages of learning how to shoot it can be intimidating and a youngster will begin to love their rifle, or fear it.

Through the years, often in working with disadvantaged youth to get ready for a week-end of deer hunting, and with most of them never having held a rifle, I have come up with a formula for orientation that works for me and might work for you.

First, if I were giving a youngster a rifle today, the next gift unwrapped would be ear protection. Given my own unhappy condition of walking away from folks hollering my name because I do not hear them, I wish we had known enough back in the dark ages of my youth to have used hearing protection. Ears remember insult and will get back at you eventually.

Once at the shooting range, I talk about the rifle, its components and a little bit about the primer, case, powder and shell. This is not a graduate course in mechanical engineering and chemistry, just a mild register of basic information. We talk about the ethics of accuracy, of going to the field with full intent of laying an animal low and meaning to do it with a single well-placed shot.

Then, there is safety. And, it needs to be impressed with the stern under current of the rifle being a gift that might come back to hand if handled irresponsibly. This part has a “no kidding” halo around it, a bullet launched cannot be stopped, a clear understanding this is serious stuff and there are unyielding expectations.

If a youngster is about to shoot a high-powered rifle for the first time, there is, even if hidden behind a facade of bravado or bundle of excitement, the simple thought, “will it kick me?” which is code for “is this going to hurt?”

Some kids stand up to this better than others of course. Some are bigger, stronger, more fearless. But, most of us are not all of those things.

So, I never impose my experience onto the child. Other than safety I have no real expectations beyond making this fun.

To begin, I have the youngster put on the muffs and dry fire several times, all the while coaching the sequences of breath, brace and trigger pull. Afterwards, we shoot and always with just one cartridge in the gun. At all times with any young shooter the teacher must be close behind and able to immediately control the weapon. There is never, ever, a time when that muzzle is behind anyone.

When teaching a kid, each shot is by extension the teacher’s shot.

Then, and this is something I have discovered to be pretty important if there is considerable trepidation, and if circumstances and safety allow, we fire the first shot while standing. And, to prevent the youngster from getting eyebrow-bitten by the scope, we do it with head elevated, looking over the scope. But remember, often if a kid turns to ask a question, that rifle will come with them like a spoke on a hub. Be in control.

“Kick” is better received both physically and psychologically while standing. The object is not to “hit something” other than the ground. It is just to get a feel for, and to get past, what seemed a few moments ago to be the absolute certainty of misplaced muscles and splintered bones.

I am pretty big proponent of starting a young shooter on a milder cartridge, something along the lines of a .243, 7mm-08, or .308. This is not always the case, of course. Some kids have their hearts set on that .270 or some such. But, do not make the mistake of thinking the first gun will be the “starter gun,” sort of like an age-based toy. I still have my first high-powered rifle. You could not buy it. My son has his. He would not sell it. When you hand a kid a rifle, it is ready-made to have memories stamped all over it.

After a round standing, to the bench we go. A sled is good to begin; and perhaps even for the first few sessions it can be very good. It is important to ease into any “next stage” only as the youngster asks to try it.

Once we are ready to shoot from the bench, I use the analogy of a baseball/softball catcher. It goes like this. I could never be a catcher because I am bat-blind. Bat swings, I blink, ball goes to the backstop. For a shooter, if the trigger pulls and he flinches, the bullet misses the target. And the deer jumps over the backstop.

I use the analogy to express the need to watch the bullet strike and animal reaction through the scope, to “stay with the gun.” The rifle will do what you tell it to do. Flinch, including a trigger jerk, and you have told the rifle to miss.

A critical step in my experience is I have the rifle already “shot in.” That way we do not have to spend time and endure the frustration of chasing bullet holes all over the paper with clicks. Besides, early on, few youngsters are good enough to reliably change the scope based on their shooting.

Initially, we shoot at no more than 50 yards.

And, we have some fun. We shoot something that will jump or bust and something big enough to hit, cans, cartons, cantaloupes. They also carry the merit of not revealing how far “off” a shot might have been.

And, I brag on them. Every critique is preceded by praise.

Then we go to targets. Fifty yards. I want success not perfection.

We discuss “precision (group size) vs accuracy (bullseye)” and try for both, moving the scope to fit them if needful, helping them understand and have that warm feeling, this rifle is increasingly becoming “yours,” a wand choosing its wizard.

If all goes well and the youngster is capable of a “victory,” we move to 100 yards.

I find something to brag on and take away from the range to show, and tell mom or dad or the neighbor; even if I have to hop out on the way home and talk to a corner “will work” sign holder, I want that new marksman see some pride. I sometimes use little 2-inch disks. A bullet hole in one of those might be found and remembered 20 years later.

And, we never overdo it. There is always that one shot “too much.” I do not want the youngster to find it. And, at some point during the sessions, maybe even the first, we do not shoot out of a sled. Sleds are golf’s handicap; and I have never pulled one up in the deer stand with me.

Occasionally, as prowess increases I move a large target, perhaps a milk jug to mimic a deer’s vital zone, out to 300 yards, with the understanding “this is really hard and if you hit that thing I will just melt down and die because I surely cannot hit it.” A hit or a miss serves to instruct. A hit, and confidence soars. The 100-yard shot is now less intimidating. A miss (usually), and it serves as an object lesson. That milk jug deer deserves the ethical mercy of being “out of range.”

Once back at the truck or house, I make a big deal, indeed a ritual out of making sure the weapon is safe. After unloading, as a habitual check, my son and I would jack the bolt five times, “this-gun-is-un-loaded.” Many years later, we hunted elk together and the guide heard the bolt being jacked before we got back to camp and asked, “Does that bolt action rifle hold five shells?” My son said, “My dad taught me it holds ten.”