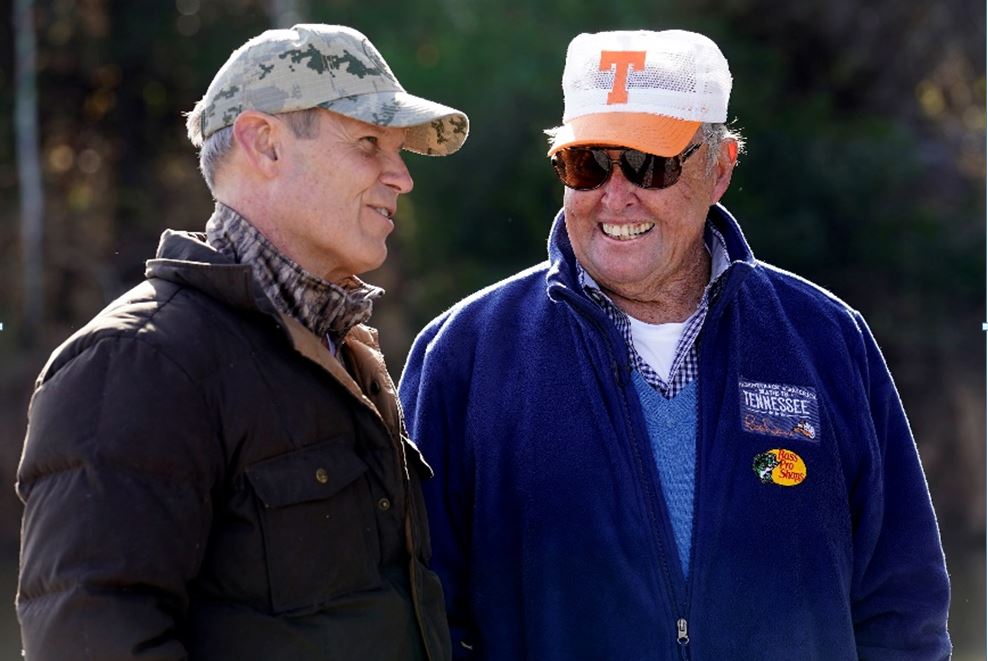 Nashville, Tenn. – Gov. Bill Lee and fishing icon Bill Dance today announced a new initiative to improve and enhance Tennessee lakes, increase visitation and honor Dance’s legacy with the creation of Bill Dance Signature Lakes. TWRA and the State of Tennessee will invest $15 million in improvements both above and below the water at 18 lakes which bear fishing legend Dance’s stamp of approval. Tennesseans will benefit from increased stocking, habitat and fisheries management, as well as improved access for fishing and boating. The collaborative effort between Tennessee Wildlife Resources Agency, Tennessee State Parks and Tennessee Department of Tourist Development seeks to solidify Tennessee as the heart of fishing in the southeast and drive economic activity across the state.

Tennessee is home to half-a-million acres of lakes and 1.7 million people who fish according to the American Sportfishing Association. Bill Dance Signature Lakes touches 39 counties including 22 at-risk or economically distressed counties, and is an important step in helping those communities create new revenue streams through increased visitation. Fishing generates $1.2 billion in economic impact annually and supports 7,480 jobs across the state.

This initiative to improve public facilities and habitat at lakes across Tennessee comes at an important time as many of the state’s lakeside communities were devastated by severe weather over the weekend.

“Bill Dance is a tremendous advocate for our Tennessee rural communities and we are thrilled to partner with him,” said Gov. Lee. “The Bill Dance Signature Lakes highlights the importance of lakeside tourism with premier fishing opportunities and we believe this project is especially important as communities recover from the recent storms.”

“I’m unbelievably humbled and excited to be involved in such a helpful project that will benefit so many people and our natural resources in my great home state of Tennessee,” said Bill Dance. “You can bet your favorite lure this project will definitely have a ripple effect for a mighty long time, not only giving the weekend fisherman, but tournament anglers a wonderful fishery as well, thanks to the great state of Tennessee and my friends at TWRA.”

Bill Dance Signature Lakes includes nine large reservoirs with a proven track record for quality fishing for a variety of fish. In partnership with the Tennessee Valley Authority, reservoirs will receive new or upgraded best-in-class ramps to improve public access for both recreational and tournament anglers. Each of the 18 lakes will see such above-water upgrades as courtesy docks, ample parking, additional access points, fishing piers and signage, to name a few. Several smaller lakes, many of which are located within Tennessee State Parks, will be managed intensively by TWRA for Bill Dance approved family fishing with regular stockings to ensure the best chance for success.

Each lake was selected by agency partners and Bill Dance for its ability to be a destination fishing location and provide quality fishing fun for avid anglers as well as families. Endorsed by Bill Dance Outdoors, projects are slated to begin in 2022 and near completion by fall of 2024.

The Bill Dance Signature Lakes at launch are as follows:

Bill Dance, professional bass fishing’s first superstar, has taught generations to fish. Dance began competing – and winning – in bass tournaments in the early 1960s. With over 2,000 shows under his belt since 1968, he has educated millions of fishing enthusiasts as host and producer of “Bill Dance Outdoors” and “Bill Dance Saltwater, airing respectively on the Outdoor Channel and Sportsman Channel. From his production studio in Collierville, Tenn., Dance oversees a fishing empire that includes his TV shows, tackle endorsements, how-to seminars, and a series of popular “blooper” videos. Dance has written seven books and his articles have been published in Sports Afield, Field & Stream, Bassmasters, Outdoor Life and more. Dance’s accomplishments, techniques, and fishing savvy have been recognized through countless awards, including 23 national B.A.S.S. titles, three-time B.A.S.S. Angler of the Year, 40 top-ten finishes and eight-time Bassmaster Classic Qualifier. In 2021, Dance received his Honorary Doctorate from the University of Tennessee for his outstanding contributions to the sport. Country superstar Luke Bryan also celebrated the fishing legend in 2021 with the release of an ode titled “Bill Dance.” For over five decades, Bill Dance has served as an ambassador for the state of Tennessee, always filmed or photographed wearing his trademark orange and white University of Tennessee cap.