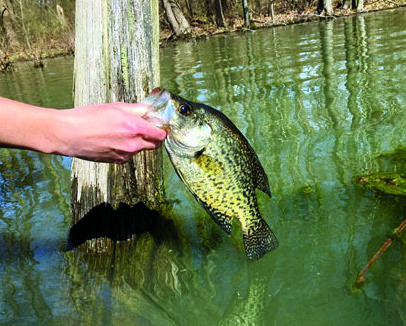 Yep. Its finally that Fall Frenzy time when most predator fish are gorging in preparation for the cold, lean days of winter.

Years ago, I would get my 10-foot johnboat and head down to the Hatchie Refuge where a couple of old veteran bottom rats had shown me the regular haunts of fall crappie in several of the oxbows. It wasn’t unusual to ease up to a treetop and pull a half dozen fat crappie out before they shut down. Then on to the next top for a while.

One of these old guys was a devout minnow fisherman. His only concession to modernization was to use a simple fiberglass pole with a slip cork to probe the branches of fallen trees. I was continually amazed at his ability to catch fish without getting hung. His livewell was a five-gallon bucket that also served as his cooler.

The other old salt only used a jig. Most times he used a black and chartreuse tube on a 1/16-ounce jighead. His other concession to modern techniques was braided line, which he said was much more sensitive than mono and would also hold up under the pressure of a fighting bass or fearsome grinnel. Both were very accomplished at sculling. They would stealthily paddle very slowly from top to top testing the waters. Both used their buckets as holding tanks, which helped to avoid spooking the shallow fish and also from getting stuck on underwater obstacles, as would a wire basket.

Big-water fishermen, over the last decades, customarily troll the depths with multiple poles up to 16 feet or more in length, mounted on rod holders spread out to cover more water and varied depths. They may use minnows, jigs, or a combination of both. Using their electronics that can consistently bring home the bacon, or slabs as they are called.

The crappie tournament craze may mean dozens of expensive boats armed with many poles, both front and back, scouring a wide area in search of scattered schools of fish that might bring the skilled anglers fame and fortune. Rather than the old wooden or metal flat bottoms of their ancestors, these modern crappie cavaliers might have as much invested in boats, motors, and tow vehicles, as was the value of their childhood home.

More recently, with the advent of incredibly advanced electronics, many serious crappie fishermen have reverted to single-pole fishing. The electronics are so highly developed, an angler can even spot a lone fish, lower his bait down to its face, and watch it be engulfed before setting the hook. Really! Several recent crappie tournaments have been won just like this. Anglers are able to search a wide area, seek out the biggest fish, and go hunting them down, eliminating wasted time that it would have taken to catch and cull smaller ones. Now that’s progress!

If you are nature lover like me, the old johnboat, sculling paddle, and 10-foot pole are my choices. Being close to the wildlife and wild places is the epitome of fishing that fills my soul. I much prefer being a part of the primitive scenery and the feel of the breeze on my face and the sounds that engulf the surrounding waters.