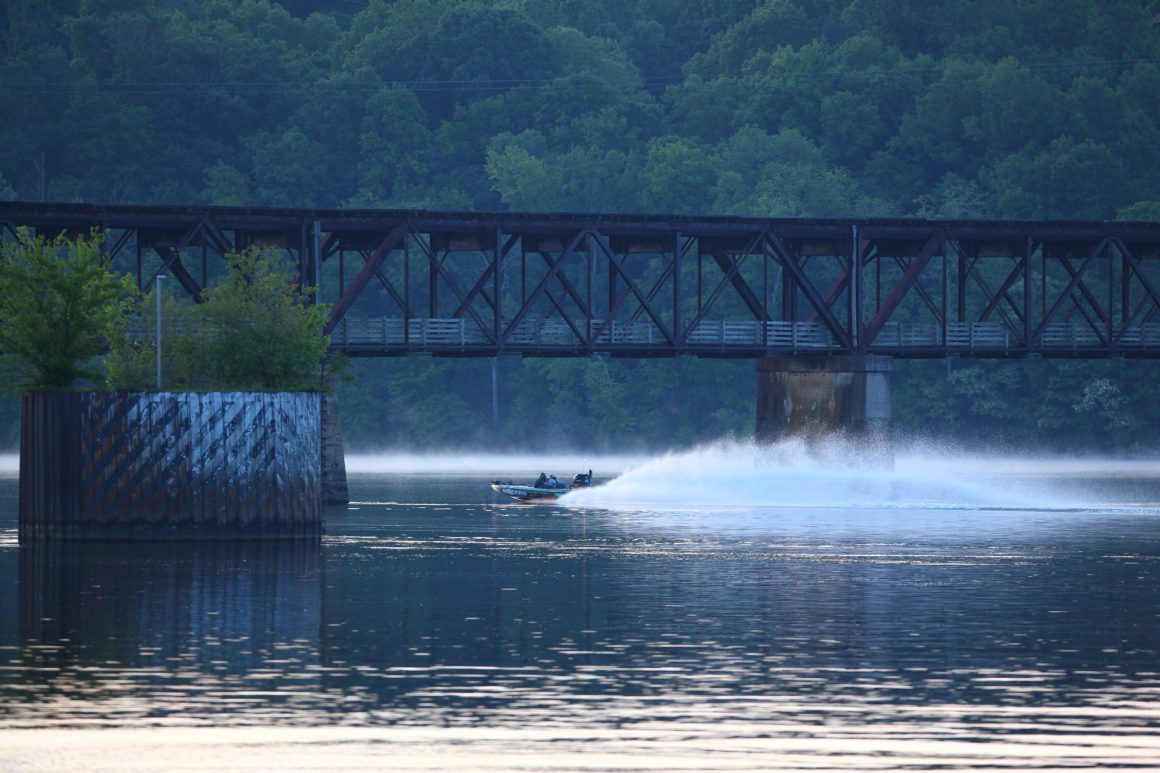 FLORENCE, Ala. — Brock Mosley believes current will play a prominent role in the Guaranteed Rate Bassmaster Elite at Pickwick Lake, and the Mississippi pro will be monitoring the Tennessee Valley Authority app regularly for water release schedules because of it.

Competition days will be March 18-21 with daily takeoffs from McFarland Park at 6:45 a.m. CT and weigh-ins each day at the park at 3 p.m.

Mosley’s hardly a go-with-the-flow kind of guy but knows current strength greatly impacts this TVA reservoir. Water movement definitely benefits bass anglers, but too much of a good thing can become a not-so-good thing. As of early March, Pickwick Dam was releasing approximately 157,000 cubic feet per second — a figure Mosley hopes to soon see tapering.

“There’s a lot of water being pumped through the system, and that’s fairly normal this time of year with the spring rains coming,” Mosley said. “I just hope that by the time the tournament gets here, it slows down to 70,000 to 80,000 cfs, or even a little less.

“If that current slows down, it will give guys a lot more options. For one thing, you always hear about guys going to ‘The Horseshoe’ (the boulder-strewn area below the Wilson Dam tailrace), and if the current is rolling that fast, it’s going to make that extremely tough to fish — and a little bit dangerous.”

Stretching 52.7 miles dam to dam and covering approximately 43,000 surface acres, Pickwick offers significant habitat options, such as islands, points, bluffs, creeks, bridges, riprap and grass. Mosley is expecting primarily a prespawn event, so the latter should play a key role — as long as the current subsides to a level the fish can tolerate.

Addressing the current’s clarity variable, Mosley said, “I always like a little stain this time of year. Pickwick can have a lot of clarity, but I think you can get away with a lot of different techniques with a little bit of color to the water.”

The Pickwick event was originally scheduled for June 10-13, but due to the ongoing COVID-19 public health emergency and associated limits on large gatherings, B.A.S.S. officials swapped this event with the Academy Sports + Outdoors Bassmaster Classic presented by Huk. Mosley said this change will likely afford anglers a more enjoyable and productive scenario.

“This will open up a lot more options on ways to catch them,” he said. “If we would have come in June, it would have been primarily a ledge deal with guys sharing schools and fishing on top of one another.

“That could have been a little frustrating for the anglers. Now it’s going to open up the entire lake, and guys are going to be able to catch them however they want to.”

That being said, Mosley believes the Wilson Dam tailrace could end up delivering the winning fish — as it did for Davy Hite who, in 2011, notched his eighth Bassmaster win on Pickwick.

Smallmouth love that cooler, more active water, but quality largemouth feed there, too. The great thing about Pickwick is that both species live throughout the lake.

“This should be a really good event after coming from Knoxville (the previous Elite event), which was a grinder,” Mosley said. “This one won’t be nearly as tough, and guys are going to catch them.”

Mosley said limits shouldn’t be too hard to come by, but competitive bags will need a kicker of 4-plus pounds each day. Largemouth generally grow bigger than smallmouth, but Pickwick’s known for whopper bronzebacks.

“I’ve seen 28-pound bags of smallmouth come out of that place,” Mosley said. “A guy could catch all of either species or have a mixed bag and do extremely well with a little bit of each.

“It’s possible that the century mark (100 pounds of bass) could be broken, but it will definitely take over 20 pounds a day to win — unless we have some type of odd weather between now and then.”

A full field of 100 anglers will fish the first two days, with only the Top 50 advancing to Saturday’s semifinal round. After Saturday, the Top 10 will advance to Championship Sunday with a chance at the $100,000 first-place prize.

Live coverage for all four days of the event can be streamed on Bassmaster.com and the FOX Sports digital platforms. FS1 will also broadcast live with the tournament leaders beginning at 7 a.m. CT on Saturday and Sunday.

The tournament is being hosted by Visit Florence.