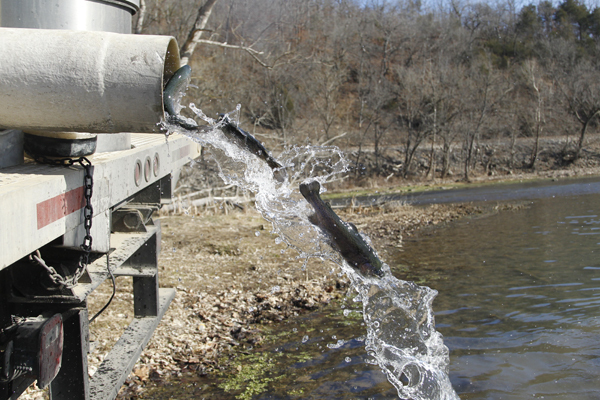 “The stockings are the result of funds from Federal Emergency Management Agency reimbursements from 2017, when the Jim Hinkle State Fish Hatchery experienced severe flooding,” Christy Graham, Trout Management Program coordinator for the AGFC, said. “We saw some reductions in production that year that continue to affect production now, so we are reinvesting those federal dollars into additional stockings for our anglers to enjoy.”

“They’re not the same as golden trout you find out West, but rather a color phase that can occur in some rainbow trout,” Graham said. “We’ve heard from many excited anglers who have caught one of these ‘bonus’ fish and have heard anecdotal reports of anglers making a special trip to target a few of these fish.”

This particular color-variant of rainbow trout was developed at the Missouri commercial fish hatchery. The fish has the distinct pinkish stripe down the middle of its body like a regular rainbow trout, while the rest of the color varies from a pale white to a golden yellow. Otherwise, they are a rainbow trout in every way.

Graham says the stocking schedule from Crystal Lake will change this year from previous schedules.

“Crystal Lake will stock once per month in the Bull Shoals Tailwater and Spring River from now through December,” Graham said. “Previous stockings from Crystal Lake occurred from May through July.”

The limit for trout on the White River below Bull Shoals Dam and on Spring River, including golden rainbow trout, is five trout per day. Anglers may keep only one trout longer than 14 inches. Special regulations for each fishery can be found at www.agfc.com/trout and in the 2021 Arkansas Trout Fishing Guidebook.