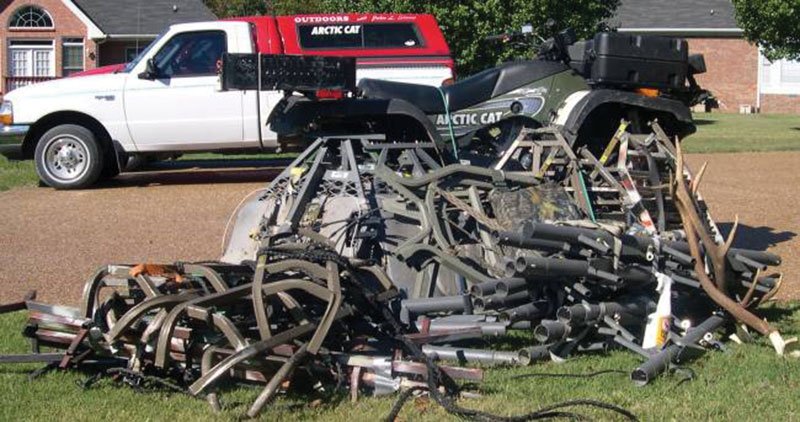 Photo above: This just one pile of the 55-stands we hung in three states.

It was cool, bordering on cold – a still almost frosty 37-degrees. Dawn was coming. I could just see it, creeping around the edge of the thicket. It was October 23, and autumn was changing into early winter. Mother Nature was changing her clothes, shedding the colorful leaves of a week ago, exhibiting more naked branches. I was 10-feet off the ground in a ladder stand, hidden back in a thicket on the edge of a small field. I was cautiously confident.

They came first on the field edge, the three does with two fawns. He came next, an anxious six-point. Then, a fat raccoon and a murder of crows. Ten-minutes later, just as the sun began to cast beams through the thicket, he jumped the old fence at the crossing. I knew where he came from and I knew where he was going . . . on my wall.

I had placed the stand in mid-September. I had not yet hunted it. This was my first time. I had waited, waited for the change. As Ma Nature was changing, so were the bucks. It was worth the wait.

I was in a strip of mixed hardwood thicket about 400-yards long and 250-yards wide. On one side was a large, mowed hay field, my ATV was parked on the far side as decoy. On the other was a row of four houses. On one end, a paved road, across the road was a picked bean field. On the other end, a golf course.

There was an old fence around the thicket, rusted and down in a few places. The does would cross the road at first light and walk the edge of the field. I knew this because I had, from another stand, already killed three. The buck, when the buck came, would cross the road and jump the fence at a low place-looking for the does from the safety of the thicket. My stand was 22-yards from the crossing.

I don’t hunt hard any more. Back then, I scouted more than I hunted. I didn’t and don’t own a trail camera. I do it the old fashioned way but the results are, or at least can be, the same. If, and it is a big if, you know what you are looking for and how to use it.

I had gotten permission to hunt this property in December, the previous year. Mostly, I just scouted it. I saw the trail, clearly marked with rubs, just inside the fence. I walked it from one end to the other and made notes. Over a half-century of deer hunting had taught me quite a bit about deer. I applied them.

1. I knew that the travel patterns of the mature bucks would change as the early stages of the pre-rut approached. That, for this area, would be late October. They would move-often into new and unknown territory.

2. I knew hunting from a stand I wanted to at least have a chance for a mature buck, prior to the time of change, would greatly lessen the odds.

3. I also knew, it was important to wait for the right conditions, both wind and temperature.

4. I knew it was too early to rattle or even spar. Sit quietly, wait and watch.

5. I also knew, the buck for which I was waiting, I had not seen and quite possibly, he had never been in that thicket. It was the time of change.

In my 50-plus years of hunting, studying, writing about and guiding for deer, I asked a lot of questions. For some, I got answers. For example, I learned one of the least productive ways to kill a mature buck was to scrape hunt. Seldom does a buck over 4.5-years visit a scrape in daylight, if at all. So I pay little attention to scrapes. It is the signpost rub that draws my attention. Those are the rubs that mean something. Like our road signs, they mark the trail for the traveling buck.

When I was with Tri-State Trophy Outfitters in Iowa, Nebraska and Missouri, I spent almost all of February scouting and mapping and making notes. Then, when we put the 55-stands up in late summer, we knew just where to put them and when to hunt them. I feel sure that was a huge part of our unbelievable success with bowhunters. I applied the same tactics at home.

As the early pre-rut begins, bucks travel. Often to areas they have never visited. They instinctively follow the signpost rubs and make new ones. They change their habits and so do I.

The string came back. The sight settled and my fingers opened. Oh, the shot was good; he went less than 70-yards.