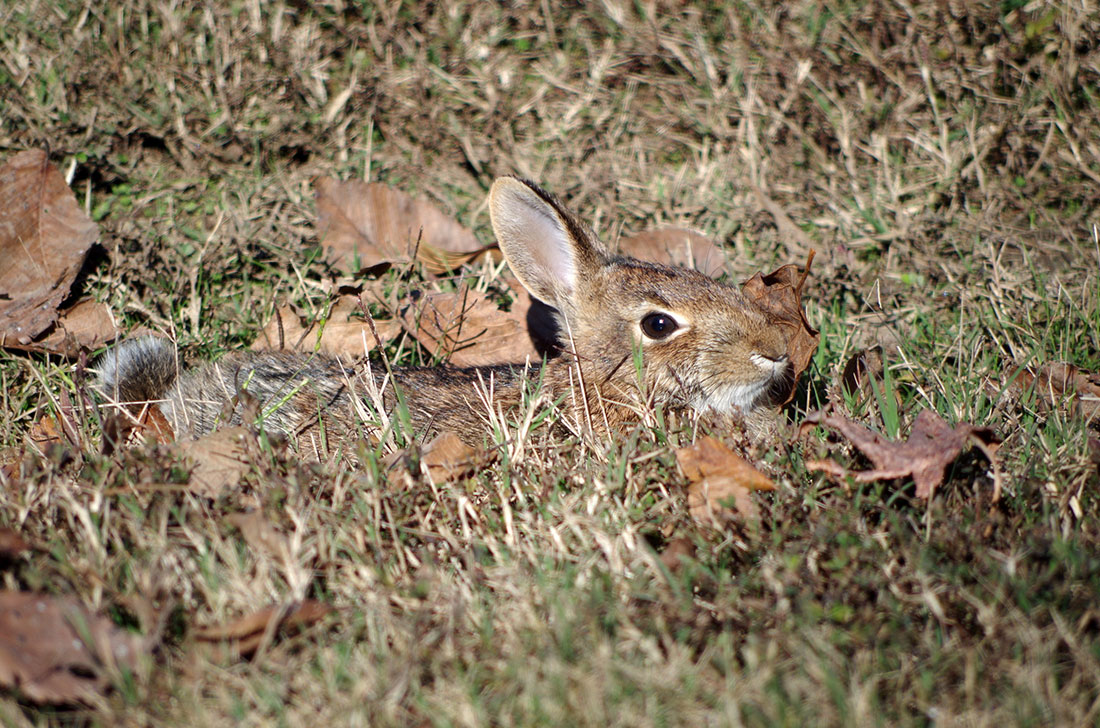 Mid-South nimrods who hunt rabbits from opening day until season’s end know that cottontail hunting in February can be difficult. Winter’s snow and ice have destroyed food supplies and cover, reducing the cottontail population considerably from what it was earlier in the season. Hunters and predators have taken a toll on the game, too. Those rabbits that manage to survive are canny animals that often elude casual hunters.

Despite these things, rabbit hunting near the tail end of the season can still be productive and fun. You will probably need more time to find them, but some cottontails manage to thrive, even in February, and if you know where and how to look for them, you can put enough bunnies in your game bag for some delicious meals at home. These tips can help.

The Sunny Side is the Bunny Side

On sunny days, cottontails spend as much time as possible warming themselves in direct sunlight. This may be on the very edge of cover, in a small opening or on a slope facing the sun, usually where the ground is dry. Knowing this can be very helpful, especially when hunting without dogs.

Take advantage of the cottontail’s sunbathing habits by stalking slowly along the shady side of narrow cover strips like ditches and brushpiles and catching the rabbits while they’re sunning. Be quiet and move slowly, allowing an approach that’s close enough for a shot with a .22 rifle or pistol. Or, if you’re using a shotgun, give the rabbit a chance and jump it from its form, knowing where it will flush from.

Work the sunny side when hunting with dogs, too. On bright days, sun-warmed edges are where beagles are more likely to jump a rabbit to begin the chase.

After a light snow has fallen, tracks can help pinpoint rabbits to a particular piece of cover. A heavy snowfall may keep rabbits virtually immobile until it crusts over. But a light covering of the white stuff lets them move around in search of food, and that provides ideal conditions for tracking them to their hideouts. Remember, though, that a few rabbits can create a lot of tracks in just one night. Don’t expect to kick 20 rabbits from a briar patch that may hide only two or three.

Another way to locate late-season rabbits is by spotting the trails they use when traveling between feeding and shelter areas. These trails look like little footpaths, four to six inches wide, where the ground cover is matted down or nipped back. If you know what to look for, you can find these trails any time of year. But they are most apparent a day or two after a light snow, when they’ll look dark against the white background. If several trails are found in one area, it’s a good bet the hunter will see some action in a short time.

Rabbits must eat lots of food to survive during winter. But because their thin coat of fur doesn’t provide much insulation from wind and cold, rabbits almost always opt for adequate cover first and a ready food supply second. This is especially true during late winter when previously good cover is useless or nonexistent. Long periods of cold weather, rain, ice and snow separate marginal and good habitats, and rabbits concentrate in good habitat for protection from the elements.

The types of cover to investigate in February all have one thing in common—they’re thick—thick enough to offer rabbits protection from the elements and predators no matter how rough the weather gets.

Big brushpiles, honeysuckle thickets, blackberry brambles, overgrown ditches, cane brakes and dense stands of native grasses all provide excellent late-winter rabbit habitat. In the early part of the season, this type of cover provides such an impenetrable rabbit retreat that most hunters shy away from it. But after brisk winds, ice storms, snow and hard cold lay down a good portion of the surrounding cover, hunters can begin to reap the harvest in areas they were forced to pass by earlier in the season.

A good pack of small beagles can be extremely helpful on blustery, cold, overcast days when rabbits are in the thickest cover. Larger breeds may have a hard time working through heavy thickets, but beagles have an uncanny knack for squirming over, under, through and around seemingly impenetrable places.

Hunting late-season cottontails can be tough, for sure. But despite the challenges involved, some of the most exciting hunting of the year is on tap for the knowledgeable February hunter. If a hunter follows the tips presented here, the last hunt of the year could be the best remembered.