Total populations were estimated at 34.2 million

MEMPHIS, Tenn. – Aug.19, 2022 – The U.S. Fish and Wildlife Service (FWS) today released its report on 2022 Waterfowl Population Status, based on surveys conducted in May and early June by FWS, Canadian Wildlife Service (CWS) and other partners.

Due to the COVID-19 pandemic, the last FWS duck breeding population survey was released in 2019.

Total populations were estimated at 34.2 million breeding ducks in the traditional survey area, 12 percent lower than 2019’s estimate of 38.9 million and 4 percent below the long-term average (since 1955). 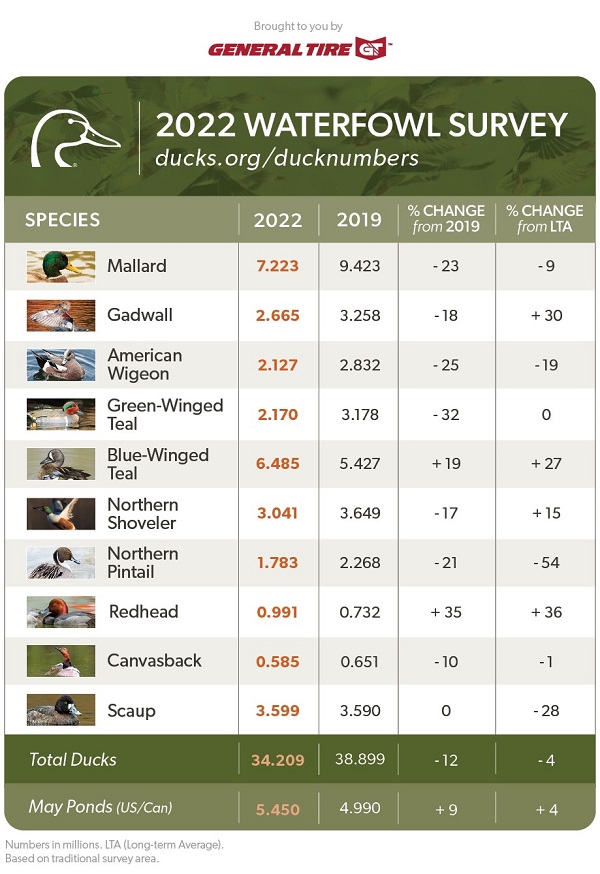 “Although the beneficial effects of timely precipitation during late winter and spring were evident by high pond counts across the eastern prairies, the total duck estimate in the Traditional Survey Area was the lowest in nearly 20 years,” said DU Chief Scientist Dr. Steve Adair. “The drop in duck numbers reflects the consequences of low production caused by multiple years of prairie drought, including 2021, which was one of the most severe and widespread in nearly 4 decades. But the survey revealed some bright spots for duck populations and provided optimism for good production this summer and carry-over of favorable pond conditions into fall and winter.”

The breeding surveys that evolved into the Waterfowl Breeding Population and Habitat Survey (WBPHS) began in 1947. The primary purpose of the WBPHS is to provide information on spring population size and trajectory for 19 North American duck species, or species groups, Canada Geese, American Coot and swans, and to evaluate habitat conditions in Prairie-Parkland Canada, through the counting of waterfowl breeding ponds.

“DU’s science team will take some time to digest this report and will soon be sharing more detailed analysis of survey results with our members,” Adair said.

The data is used to inform hunting regulations in the United States and Canada and provide important information for researching relationships between waterfowl and their habitats, which are critical to effective conservation planning.

The results are eagerly awaited by waterfowlers, scientists and other bird enthusiasts. Healthy numbers don’t guarantee duck-filled skies. But knowing the status of duck populations helps hunters plan how and where to budget their time and resources.

Each spring, the FWS and CWS send 12 air crews and five ground crews into the 2-million-acre survey area, which stretches from Alaska’s Seward Peninsula to the shores of Newfoundland, and south nearly to the Nebraska−South Dakota border. The CWS also operates three helicopter air crews who survey portions of eastern Canada. For weeks, crews fly, drive and hike survey routes that have remained largely unchanged for over 50 years.
“Whether it’s good news or bad, Ducks Unlimited believes in following the science. We are grateful for our federal, state and provincial partners resuming the surveys to gather the data we’ve all come to rely on,” said Ducks Unlimited CEO Adam Putnam. “This year’s survey revealed what many expected, lower breeding duck populations partly as result of the drought we’ve experienced the last few years. While we never like to see these declines, we know that prairie drought can increase wetland productivity and sets the stage for waterfowl success when the water returns, much as it did this spring in parts of the prairie. We will not stop working toward our vision of skies filled with waterfowl today, tomorrow and forever.”

Ducks Unlimited Inc. is the world’s largest nonprofit organization dedicated to conserving North America’s continually disappearing waterfowl habitats. Established in 1937, Ducks Unlimited has conserved more than 15 million acres thanks to contributions from more than a million supporters across the continent. Guided by science and dedicated to program efficiency, DU works toward the vision of wetlands sufficient to fill the skies with waterfowl today, tomorrow and forever. For more information on our work, visit www.ducks.org.